The stories of Corbière and Petit Port provide a fascinating insight into the shipping, quarrying and tourism industries of the Island. The history of maritime misadventures off the coast led to the building of the iconic Corbière Lighthouse. This, together with a strong quarrying presence led to the railway being extended and the area becoming a tourist destination.

The name La Corbière originates from old French meaning place of the ravens, crows or cormorants. Mention of the name can be found as early as 1309 with the Assize Rolls. Evidence of settlements in this part of the island have been discovered as far back as the Neolithic period with La Table des Marthes, a structure from that period, almost opposite the former train station on the Railway Walk. The granite capstone covers a chamber which is now filled in. Excavated in 1850 it resulted in finds of pottery and stone axes, as well as evidence of extensive burning inside the chamber.

The earliest dolmen in Jersey can also be found on the l’Oeillière headland at Petit Port. It’s called La Sergenté and its passage grave dates to between 4500 and 3250 BC.

This stretch of coastline has numerous fascinating maritime stories associated with it. A guide to the Channel Islands from 1862 talks about the area:

”The dreaded Corbière, the extreme southern limit of the Bay of St Ouen’s. No wonder this terrible group of rocks should be dreaded by the mariner, storm caught perhaps as he may be within sight of home and rest.”

The hazardous nature of the coastline is illustrated in the story of the ship, the Express, whose wreckage on 20 September 1859 was captured by the artist Philip Ouless. The disaster led to the tragic loss of two lives. However, 108 people were saved including the complex rescue of three racehorses.

Subsequently Captain Robert Mabb was taken to trial and was censured for steering too dangerous a route. A recommendation that a licensed pilot be placed on board all future vessels leaving the island was also suggested. It was this and several other disasters that led to a petition by the masters of steamers and sailing vessels in 1865. They requested a lighthouse be built at Corbière to provide guiding light for those travelling near the coast. The lighthouse, designed by Sir John Coode, was completed in 1874.

Another maritime story relating to the area can be found in the Aberdeen Daily Journal on 22 August 1922. It concerned the crew of a small fishing boat who, while hauling in nets near to Jailer's Reef, Corbière, encountered two huge tentacles rising out of the sea. One grabbed the mast, the other a leg of one of the crew. The remaining crew immediately began slashing the tentacle with knives until it released their fellow crewman. They then hammered blows on the tentacle attached to the mast until it let go and disappeared back into the depths. 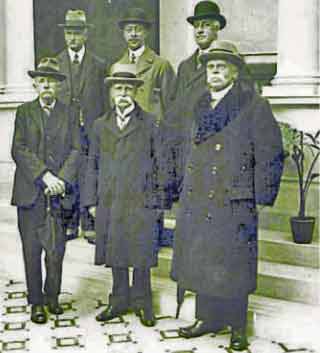 However, the Corbière and Petit Port coastline is not simply a maritime story. The site of the current desalination plant provides an interesting history of a more land-based nature. The current plant dates to 1999 and replaced the original seawater desalination plant built in 1968 by the Jersey New Waterworks Company. Before, this site operated as a stone quarry, known as La Rosiere Quarry, which officially closed in 1957 when the Le Quesne family gifted it and the surrounding land to the people of Jersey.

The quarry’s origins can be traced back to the early 19th century and it can be clearly seen on the Godfray map of 1849. It supplied high quality pink granite for buildings and ornamental work, under the Channel Islands Granite Company, and one of the jobs it was used in was the construction of the Victoria Embankment in London between 1864 and 1870.

The presence of the quarry was also a key factor in the establishment of a railway in the area. Landowners petitioned the States in 1871 on behalf of the owner Maxwell Bury, to have the line extended. The petition was presented to the States by the Constable of St Brelade.

It requested a railway to transport granite from the quarry to St Aubin and then on to St Helier Harbour. Following numerous financial delays it was eventually completed by the Jersey Railways Company Loimited in 1884. Initially the line only ran as far as the quarry. However, it was subsequently extended in 1899 to the end of Corbière.

The lighthouse and, in the early 1900s, a camera obscura, attracted numerous tourists to this picturesque part of Jersey. Consequently, aided by the reilway, a number of hotels were built from the late 19th century onwards. While some have since been redeveloped, one which still exists is the Corbiere Pavilion Hotel, now called Corbiere Phare.

Property contracts reveal the land on which it was built was originally owned by the States prior to its sale to Alfred Scrimshaw in 1955. They had acquired the land from Mary Ann Arthur on 29 November 1873.

It was in the late 19th century that the origins of the hotel can be found. With the land owned by the States, Francis Hawksford sought permission in October 1893 to lease the land and build a pavilion and refreshments room. His architectural plans dated 27 April 1895 are held at the Archive. The hotel was built by the following year. Possibly for financial reasons contracts state that at this time Charles Wyatt, William Dickson and Adolphus Le Couteur were taken on as partners in the lease.

With regard to private residential properties, several families and individuals emerge as prominent around Corbière and Petit Port. None more so than entrepreneur Charles Brockhurst, who owned a number of properties around Petit Port and Le Grouet.

In the case of Le Grouet, located on the coastal side of the road from Petit Port to Corbiere, he built the house on land bought in two transactions from Alfred Bisson and Edward d’Aubert in 1910. A prominent businessman, he was a director of several local companies, including de Gruchy and the Overseas Trading Corporation, and took over the running of accountants Alex Picot and Company from its founder Charles Roberts, in 1902.