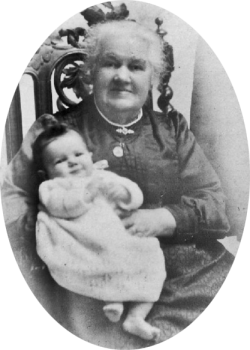 Jane Gale with her great-granddaughter

Direct links to lists of baptisms, marriages and burials for the Gale family can be found under Family Records opposite. If you want to search for records for a spelling variant of Gale, or for any other family name, just click below on the first letter of the family name you are interested in. This will open a new tab in your browser giving you a list of family names beginning with that letter, for which there are baptism records in our database of half a million church and public registry records.

If you can help with information about the Gale family, please contact editcontact@theislandwiki.org, using Jerripedia as the subject of your email. We are particularly interested in information which will help create further family trees, family histories and photographs

There are three possible origins of this surname given by the Internet Surname Database. The first is from an early medieval English nickname for a cheerful, pleasant or roisterous person. This is derived from the Olde English gal, meaning jovial, rowdy or merry. The second source is from a personal name, introduced into England by the Normans after the Conquest of 1066 as 'Geil', and having the same meaning. The third possible source is from the Old Norman-French gaiole, meaning a jail, and thus a occupational surname for a jailer.

The name first appeared in Jersey records in 1766.

These wills created by members of the Gale family are now held by Jersey Archive. By visiting the archive site and using the names, dates and reference numbers shown here, it is possible to view a copy of each will. You will have to subscribe to the Archive's online service to do this. To find out more about this collection, which covers the period from 1663 to 1980, and how to search for your family's wills there, visit our Jersey wills page