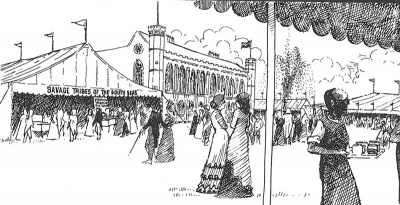 It was marked by 'a great and universal tide of successes'. In the eyes of Channel Islanders It rivalled the great exhibition at Crystal Palace.

Open for three weeks, it drew 30,000 visitors to the grounds of Victoria College and on the opening day the crush was so great that officials had to retire from the Bagatelle entrance "whereupon several people, it is believed, taking advantage of the confusion managed to enter without payment".

The purpose of it all was to encourage trade and commerce. But the Victorians were prudish about admitting it. The Jersey Express noted: "Such exhibitions will prove a source of pecuniary benefit, though this is but a narrow and sordid view which few will advance as a weighty argument in their favour".

More important than the 'narrow and sordid' commercialism of it all was the pomp and ceremony. The scene on 28 June 1871 was a splendid one. Mist and heavy rain had dampened everyone's spirits as workmen put the finishing touches to the great halls, but the sun shone brightly on the day itself.

The gates of the College grounds opened to the public at 11 o’clock. Banners floated from the College towers, the roof of the pavilions and the horticultural tent. There were gay decorations on the annexe and the annexe to the annexe, which had been hurriedly erected. Shedding for the cattle had been put up all round the school pitches and the College cricket field held an assortment of horses, cattle, poultry, dogs and agricultural implements.

Along Bagatelle Road a procession of officials lined up awaiting the Lieut-Governor Major-General Sir Philip Guy, who arrived with military punctuality at noon. The procession then marched forward: the honorary police of St Helier, the exhibition committee, secretaries of departments, committees of departments, naval and military officials, guests, visitors, Deputies, Constables, rectors, judges and both Bailiffs; and simultaneously the Jersey Philharmonic Society band struck up with Auber's exhibition overture, a performance which was reported as being 'slightly marred by the high wind'.

When His Excellency entered the main pavilion the Jersey Musical Society choir sang the 100th psalm. Then there were speeches followed by the Hallelujah chorus from Handel's Messiah, anthems and chorales by Bach, Handel and Beethoven, plus a piece called It is a good thing composed by a Jersey music teacher, Edwin Lott, who does not seem to have been overawed by the company of great composers. 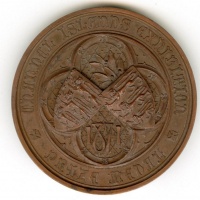 When His Excellency declared the exhibition open, Colonel Touzel signalled the St Helier battery of the Royal Jersey Militia, who were stationed in the rear of the College. They fired a salute. At least those who saw the signal fired a salute. The rest followed soon after and the pavilions resounded to ragged gunfire for a full five minutes.

Afterwards His Excellency and the exhibition president, Mr Charles Philip Le Cornu, marched through the halls. They admired the exhibits and also a Royal statue donated by Queen Victoria. The bust was a prize piece and the secretary recorded in his report: 'Her Gracious Majesty the Queen has signified her royal pleasure and readiness to take part in the exhibition and though, not able from State engagements and other important arrangements, to be Herself or any other member of the Royal family, present at the opening, yet most graciously gave directions that a Marble Bust (after a design of her Royal Highness the princess Royal), of the late Prince Consort, named the Good, should be forwarded to grace the exhibition." For three weeks Prince Albert the Good stared down on allcomers.

On the evening after the opening day a grand banquet took place at the Queen's Assembly room, Belmont Place. It was a stag party. 120 gentlemen sat down to mock turtle soup, filleted soles, boar's head with pigeon pies; mayonnaise of lobster or boiled chicken and bechamel sauce, gooseberry tarts and cabinet puddings. It was just as well there were no ladies. If they'd survived the meal, they certainly would not have survived the speeches.

There were 25 Toasts to the Queen, the Prince and Princess of Wales, the Army, the Navy, the Jersey Militia, the Guernsey Militia and the Governors of Jersey and Guernsey, followed by thanks and the mention of the Bailiffs of Guernsey and Jersey, who then replied; a speech by the Attorney-General in praise of the Dean and clergy, to which the Dean responded; the president of the exhibition who stood up to loud cheers and gave a long, long speech, which was only punctuated by frequent cries of 'hear, hear'; the treasurer, George Le Gros, proposed the health of the Vice-Consul of France and Baron de Cussy, the Vice Consul, begged the company to accept his heartfelt thanks and a good deal more.

Then there were Col Le Couteur, Mr Rouget from Guernsey, the Rev Le Maistre, who was cheered when he called the exhibition a 'labour of love', Mr Nicolle from Guernsey, Mr Bishop and the Rev Brehaut, Mr W H Le Feuvre, Dr Dickson, Mr W G Reid, Mr H L Manuel and Capt Sausmarez. Finally the president proposed a toast 'to the unity of Channel Islanders' and McKee's stringed band took over for the rest of the evening.

Interest in the exhibition continued, though crowds began to tail off towards the end. To the late Victorians it all represented an impressive sight. The inaugural pavilion had been set up in front of the College. It had a lofty pagoda-style roof and open sides, the pillars were gaily draped with foliage and ornamented with shields bearing the Island crests. Behind the pavilion was the horticultural tent and in its centre a massive fountain sending up continuous streams of water from four dolphins "each bestridden by a chubby little water cupid nursing a fish".

Then there was the show yard - Victoria College's cricket pitch - for the agricultural exhibits peopled by a raucous collection of animals including a laughing jackass and showing off to good effect the latest examples of 'agricultural machinery in motion'. Besides the agricultural and horticultural sections, separate pavilions were devoted to poultry and dogs, art and industry, and loan collections.

The loan collection in the College hall seemed 'like a fairy palace' to one newspaper reporter. It was full of objets d'art. Unfortunately the palace had its deficiencies. Paintings, antiques, statues and costumes were crammed into every corner, though this was not the committee's fault. The same newspaperman hastened to explain that "the defective light which in some places prevents objects being seen, cannot be laid to the Committee's charge." Still, it was a defect in the exhibition's fairy-like aura.

In the midst of all this magnificence the judges were faced with the job of awarding prizes. They did so with impartiality so that both Channel Islands had a satisfying half-share. And they backed up the awards with reasoned judgment. On one occasion the Jersey Express informed its readers that "one of the judges in this class, a gentleman eminently qualified to give an opinion, remarked that he had no idea that there was anyone who could prepare butterflies for the hair in the manner done by Mrs J Barnes".

If the judges were surprised by the standard of Channel Island artistry, some of the decisions they had to make seem even more surprising. No doubt the Mesdames Benest deserved a top prize for 'exhibiting some very elaborately embroidered underclothing' but who could really be expected to choose between the merits of Messrs C and J Pallot's corn crusher and Mr Thomas Corbett's oil cake breaker? And was Mr Kilner's model grab link a superior example of craftsmanship compared with Mr Henry Lipscombe's collection of fancy biscuits in a tin?

If the choice was difficult, the judges did have some compensation. One morning's work included sampling exhibits of beer, liqueurs and wine, which was then spoilt by a combination of vinegar, confectionery and chewing tobacco. And still the judges emerged with sound, reasoned decisions. "In 'Ale and Beer' we highly commend Messrs Quirk and Randall, the former for pale ale, the latter for good, wholesome beer," they decided.

After due consideration, another prize went to Mr Beaume because "we feel it our duty to award a silver medal for a collection of cordials and liqueurs of great excellence, manufactured by himself." One imagines Mr Beaume's stock was somewhat depleted by the passage of this estimable jury.

To go with the exhibits, there were several grand spectacles. Pride of place went to Dr Fournier, of Paris and St Mark's Road, who lectured on agricultural chemistry. He won a silver medal but he was disqualified in another class on the grounds that "it was not practical to test the utility of his chemical products".

Agriculture as a whole was well represented. Altogether there were 550 entries requiring 2,446 feet of shedding covering a total of 40,000 square feet.

There were also some bizarre exhibits. Two items in the agricultural tent were described as representing "the furs and fossils of the far north" and the "rude but useful implements of the all but savage tribes of the South Seas".

The exhibition continued through the summer days of early July. It had been opened with a blaze of publicity and it had to be closed in the same manner. The great Channel Islands exhibition of 1871 ended as ceremoniously as it began. Each member of the exhibition committee made a final speech and their eloquence was only interrupted by the chanting of the Jersey Philharmonic Society's choir.

After the secretary had made his report, the company sang See the conquering hero comes; after the agricultural report, there was a rousing chorus of All among the barley; after the horticultural secretary's speech, everyone joined in the happy market gardener's song; and after the last word had been said on the subject of dogs and poultry, the audience tackled the numerous verses of a song called The Chough and the Crow.