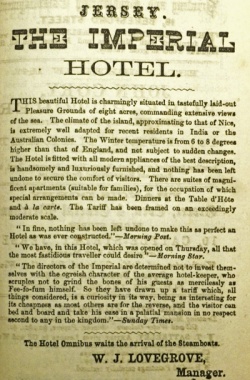 An advertisement announcing the opening of the hotel in 1866

It started life as the Imperial Hotel in 1866, built on the site of a house called Le Fregonniere, owned by George Ingouville a 19th century property developer who sold the house to Richard Hare 1862. A year later the Jersey Imperial Hotel Company bought the property, which was demolished to make way for the majestic Imperial Hotel, which had it’s grand opening in September 1866.

When it opened it was said that ‘the splendour and extravagance of the finished hotel was unimaginable’. The main building consisted of five stories in a central block, flanked by two wings on either side and having eighty windows on the façade. The left flank contained the drawing room and dining room; on the right flank were the smoking room and other spacious salons. A grandiose staircase led to the portico over an extended basement, in front of which was ‘le skating’, a rink that challenged vacationing ladies whose interest and daring went beyond croquet to become adventurous on roller skates.

Despite the hotel’s eloquent promotional brochures, which advertised the glories awaiting the traveler to Jersey in the spring, the Imperial had never prospered; it was too expensive for tourists in an age that saw a slump in the economy, and therefore, just as mild spring breezes began to blow in May 1880, it had to close its doors.

In 1880 the Society of Jesus were looking to acquire a large property in Jersey to transfer a major seminary in Brittany to the Island. They purchased the Imperial Hotel on 20 June of that same year. The French Jesuits, as foreigners, were not allowed to purchase property in Jersey and therefore the building was purchased by their English counterparts, who then leased the building to them. It became known as Maison St Louis.

During the Occupation the German forces requisitioned the college from June 1941 until May 1945. They caused extensive damage to the property and this resulted in a claim for £4,488 under the Channel Islands Rehabilitation scheme.

The Jesuits decided not to return to Maison Louis after the Occupation and the premises were sold to Major J V Reynolds in May 1953. Major Reynolds decided that the best use for such a fine building would be as a first class hotel and thus Hotel de France was opened on 15 May 1954.

Boasting historical character and style, it also supplies the comfort and facilities expected by today's guest.

The current owners, the Parker Family, purchased the hotel in 1971 and extended it considerably over the following years. New wings were constructed, together with extensive conference facilities, banqueting kitchens and a new indoor swimming pool and spa.

From the hotel website The Hotel de France, originally known as the Imperial Hotel, started life way back in 1862 when a group of business men who were building and running hotels in some of the well known south coast towns, including Bournemouth, Weymouth and Torquay, decided to exploit Jersey’s growing popularity as a holiday and convalescing resort. They formed a company in collaboration with two Jerseymen, a merchant, Mr Frederick Carrel and Jurat Joshua Le Bailly, who was president both of the local Chamber of Commerce and the Mercantile Union Bank.

The site was a property known as La Fregoniere, a large house of some grandeur enclosed by lush green trees, a meadow with a small herd of Jersey cows and a large cider apple orchard – this was the period when cider making was one of Jersey’s main agricultural industries. The property covered to nine acres, for which £4,000 was paid in 1862. 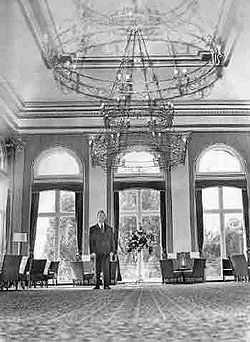 In August 1863 when architects decided the house could not be incorporated into the proposed hotel project, the site was levelled and building work started. It was not until November 1864 that Mr J Amy, a master carpenter, completed the roof so as to allow work on the interior to commence.

Eventually the Imperial Hotel opened for business on 1 September 1866, with W J Lovegrove, a keen photographer, as the first manager. The large photograph below, dated November 1866, was taken by Mr Lovegrove with a home made plate camera.

But the Hotel de France was far too grand an establishment and closed in 1880. For the next 60 years it became Maison St Louis, a Jesuit College for students studying theology, philosophy and science.

The German forces occupied the island in 1940 and Maison St Louis became a training school for German NCOs. When Jersey was liberated in 1945, the property remained empty for eight years. It was then purchased by the Reynolds Family and opened in 1954 under the present name, the Hotel de France. The current owners, the Parker Family, purchased the hotel in 1971 and extended it considerably over the following years. New wings were constructed, together with extensive conference facilities, banqueting kitchens and a new indoor swimming pool and spa.

Over the last decade, the Hotel de France has undertaken a continuous series of major refurbishments, resulting in the splendid establishment as it stands today. The original first-floor reception, for instance, has been moved to its present ground-floor position. The hotel now comprises 284 bedrooms, including twenty suites.

2006 saw the opening of the Ayush Wellness Spa, the first Ayurvedic Hotel Spa in the United Kingdom, dedicated to the principles of Ayurvedic therapies and luxurious spa treatments. This six treatment room spa has its own Indian physician and a staff of both Indian and Western therapists. To complement the spa is a swimming pool complex with an infinity pool, hydrotherapy pool, hot and cold plunge pools together with a sauna, steam room and a gym.

This picture was previously believed to have been taken in the 19th century, before the dawn of the age of flight, and appeared on the hotel's website. It has since been established that it was taken much later, possibly in the 1950-60s, and it is no longer on the hotel website
Retrieved from "https://www.theislandwiki.org/index.php/Hotel_de_France"