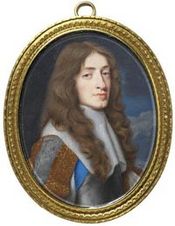 An early miniature of James when Duke of York

James, brother of Charles II and the future King James II, visited Jersey with his brother in September 1649 and remained after he left in February the following year. He was appointed Governor (a position held at that time by Royal Courtier Henry Jermyn) but only held the post for six months, handing it back to Jermyn when he left Jersey on 21 August 1650.