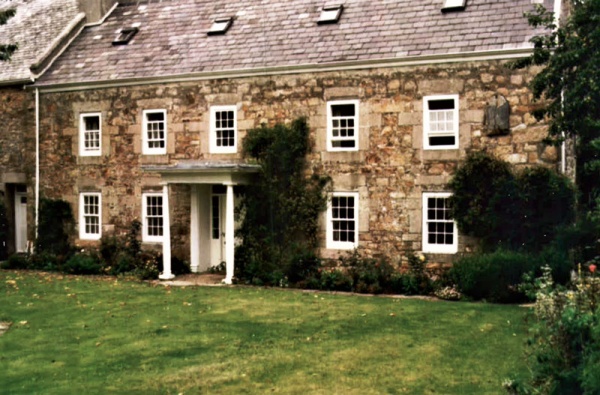 Families associated with the property

Old Jersey Houses is very confusing concerning ownership of the property in the 18th century. On the one hand the substantial entry in Volume One states that the house passed to the Vibert family in 1739, but on the other it is suggested that it was build by Charles Arthur in 1747. These two apparently contradictory statements can probably be explained by the fact that Charles and Jeanne Arthur were brother and sister. The house presumably passed to Jeanne on the death of childless Charles, and then to the children of Jeanne and Philippe Vibert.

Historic farm group comprising mid-18th century house, with 17th century remains, and 1831 outbuilding range. Retains historic character and fabric including a rare mid-18th century sundial. Farmsteads make a major contribution to the distinctive character of Jersey. Their siting in the landscape relates to the way in which the Island has been settled through history, and the overall scale, form and character of Jersey’s farmsteads is the result of their historical function and development to the present day. The farmstead architecture displays the importance and prosperity of Jersey’s historic family-based farming. La Grange emulates the polite architecture of Georgian fashion but with a continuing local character. The overlay of French and British architectural influences is unique to Jersey and the Channel Islands. The initials on the sundial are for Charles Arthur. Shown on the Richmond Map of 1795. House and attached linear farm building range. House is 2 storey, irregular 5 bay. Pitched slate roof with pair of rubble granite chimneys. Granite rubble walls with dressed stone quoins. 12 pane sash windows within long and short stone surrounds. 6 paneled front door with transom light and margin lights under porch supported on 2 rounded columns. Sundial dated 1742 mounted at first floor level. (CAT.1742.) Rear elevation of house includes unusual Dutch gable to central bay, with oval window and catslide roof behind. Substantial granite range of 2 storey farm buildings to west. 12 pane sash windows with quoined surrounds. Pitched slate roof. Published references to 17th century stone fireplace (including raised cross chamfer stop), evidence of lost tourelle staircase, and joinery work of 1831.

This house merits a full page in Volume One, and several other mentions throughout the two books. This is explained by the fact that the author Joan Stevens and her husband owned this property in the 20th century.

"The appearance of this house is very deceptive, for from the outside it appears to be mid-18th century, and could well have been built at the time of the sundial, found in fragments in the garden, and dated 1747. It is somewhat overshadowed by very large and tall farm buildings, three storeys high, built in about 1830.

"But indise several vestiges of much older periods have been found, principally the fireplace in the main living room. This has a raised cross as the chamfer stop of the left upright. The lintel had gone when the fireplace was uncovered in 1949. It had then been covered up and fitted with a Victorian iron grate."

The remainder of the article is devoted to a discussion about floor levels, missing staircases, shapes of windows and a reference to the datestone mentioned above.