Separate cards were issued by the parochial authorities. We have been unable to find any information about these cards. Another from St Saviour has come to light, but whether they were issued by other parishes has not been determined. This card was issued to William Warren Hobbs in August 1941. He already held the official German card (right) issued in January of that year

In December 1940 the Germans, who had occupied Jersey the previous summer, and wishing to control the movement of islanders, decreed that everyone over the age of 14 must be officially registered under the Registration and Identification of Persons (Jersey) Order, 1940. The Order was announced to the States on 16 December 1940. The details of the registration process were announced on 30 December and expanded on 2 January 1941, after which registration started.

The Occupation Registration Cards show pictures, family details and addresses of islanders who lived under the German Occupation.

Every islander was then issued with an identity card and the German authorities kept an official set which, after the war ended, was housed for many years in filing cabinets in a storage room at the Bailiff's Chambers, and is now at Jersey Archive.

The information collected included name, maiden name, address, date and place of birth, occupation, any militia experience and distinguishing features. Children under the age of fourteen were recorded on the back of their father’s card. The cards were updated regularly with details added if people moved or had more children, and as soon as children reached the age of fourteen they were issued with their own card.

The basic information on each card can be accessed on the Jersey Heritage website and also at Ancestry (free access). The individual registration cards can only be viewed and downloaded by subscribers to the Jersey Heritage online service or through pay per view. Registration cards for those who died during the Occupation were destroyed, and the information they contained is no longer available unless the associated identity cards have survived in private collections. These people are not included in our index.

Each card was accompanied by a blue form that contained extra information not on the cards, including colour of hair, colour of eyes, physical peculiarities and military service. Names of children under the age of 14 were noted on the back of the father’s card, and each adult’s photo was attached to the front. Many records show two addresses for individuals who are shown as being 'of' one address and residing at another. Our index includes entries for both addresses.

Given the significance of the cards in an island which had hitherto been strongly opposed to controls of this nature, it is surprising how little has been written about the German registration scheme. It gets only a passing mention in most histories of the Occupation, with only three single-line entries in Leslie Sinel's Occupation Diary.

The Germans, who held copies of the registration details, had several reasons for requiring all adults to hold and carry identity cards

In addition to these cards, a second form of identity card was issued by parish authorities. The blue card illustrated at the top of the page was issued by the Parish of St Saviour in August 1941 to William Warren Hobbs. He already held a German card issued in January that year. We are still investigating the dual system and so far, thanks to the almost total absence of published information, have been unable to discover why the parish cards were issued, to whom they were issued, and whether all parishes were involved. 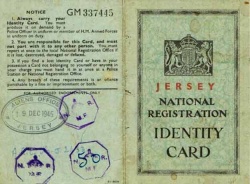 A further card was issued after the Liberation. It was very similar to the UK National Registration Identity Card which was introduced in 1939. We have been unable to establish who was issued with these cards, and why, but it is probable that, as in the UK, they were used to establish identity in relation to rationing. The cards were discontinued in the UK, and presumably also in Jersey, in 1952

After the outbreak of the war the UK introduced a compulsory registration and identity card very similar to that imposed on the Jersey population a little over a year later. These cards were required to complete a rapid and accurate population census and also to provide all adults with a simple means of identification in the event of rationing being introduced. They continued in use until 1952, after which holders were no longer required to carry them. Perhaps the UK Government did not have time to get around to extending the scheme to the Channel Islands before they were occupied, or perhaps it was never intended to do so.

But after the Liberation similar National Registration Identity Cards with Jersey printed in red on the front were issued in the island. Save for being sent one of these cards by a private collector, we have been unable to find any information on this scheme, why it was introduced, to whom it applied and how long it lasted.

Digitising and indexing some 50,000 records (many women are listed twice, under their maiden name and their married name), has been a time-comsuming process, but the A-Z index on this page is now complete. Lists of individuals have also been added to many of our family pages, but this work has yet to be completed.

It must be stressed that this is an index, listing only the name of the identity card holder, their date of birth, date on which they applied for a card or had their details changed, and their address, some of which, as noted in the box above, are likely to be inaccurate. Further details will be available for some individuals on the Jersey Heritage website or at Ancestry, but the full details recorded for any individual can only be accessed by Jersey Heritage subscribers.