The Manor House of Rosel, which has been thrice rebuilt, is most pleasantly situated in the parish of St Martin, overlooking the sea and the opposite coast of France. To the seaward the grounds are laid out as a park, and are studded with timber as fine as any in the island, which is not, by the way, celebrated for the large growth of its trees. Towards the land, the chapel, with its quaint belfry, stands in a sheltered nook, in front of gay parterres, and a smoothly-shaven lawn, which is bounded by a vivier or fish-pond. The stream from this pond flows through a beautiful valley, the cotil, or hillsides, of which are thickly covered with saplings. These manifold changes of scenery give an indescribable charm to the grounds, and make them appear of far larger extent than they really are.

The house itself is a square, battlemented structure, surmounted by a tower; and close at hand is the outward and visible sign of feudal prosperity in the shape of the Colombier or dove cote, which, as usual, is round, with a pointed roof, and like the keep of an ancient castle, mounts guard over the stables, which are built in a hollow, on the site of the ancient manor-house, erected in common with all ancient Jersey dwellings, on the lowest level, pour l'abri. 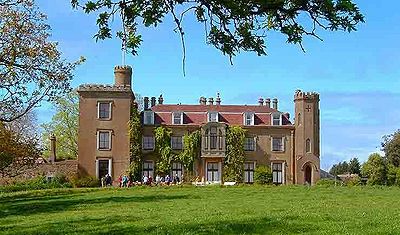 The manorial chapel is dedicated to St Ann, and was, after the Reformation, like all similar structures, degraded to the base uses of a barn. The late Seigneur restored the edifice in very correct taste, beneficed a chaplain, and caused service to be regularly performed there. In his memory, a window to the West has been inserted, after a design by Winston. It is composed of three medallions, one above the other. Above and below each, are angels holding scrolls, on which are inscribed the beatitudes. On the upper medallion is represented the "Sermon on the Mount"; on the centre one, "Christ blessing little Children"; while the third portrays "Christ washing the Disciples' feet". Beneath this window is a brass, bearing the following inscription, in old Roman characters usual in the eleventh century (the probable date of the erection of the Chapel):

Rosel is one of the five Fiefs Haubert of the island, and "is held by Knight's service, wardship, and homage; and for the which fief and manor is owed 60 sols, 1 denier of relief, with the grand-sergeantry of acting as the King's Butler, during the stay of our Lord the King in the island, and for the which the holder of the said fief shall receive the emoluments due to the King's Butler aforesaid; furthermore, he is bound by the tenure of the faid fief to meet the King, horsed, fo far in the dea as the water may reach to the girths of his daddle, and do likewise to take him at his departure; and he oweth suit to the King's Court at every opening of the same, at the three Chief and Principal Pleas of the year". 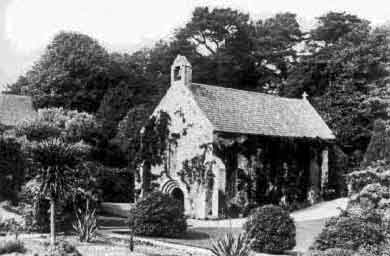 The first known seigneur of Rosel is Ingram de Fourneaux, but he remained in France and lost his Jersey estates after the Channel Islands split from Normandy in 1204. The fief was then given to Drogo de Barentin, who was Warden of the Isles and it was held by his family for four generations.

His successor Philippe left for England in 1367 having sold his island estates to his attorneys, Guille Payn and Raoul Lempriere. The exact reason for his departure is unclear. Some say that he was accused by his family of being a leper and sold his property before it could be siezed from him. Others cite the row between his wife and Jehannet de St Martin, whome she accused of calling her an adultress. She called on her sons to avenge this insult and they attacked de St Martin and tore out his tongue.

They fled to France but one was captured and hanged. The other remained in exile in Rouen.

When Payn and Lempriere divided up the estates, the latter took Rosel and his family held it for five generations. Renaud Lempriere was put on trial in 1463 during the French occupation of the island for bribing a paroled prisoner at Mont Orgueil to leave the gate unbarred so that the French could be attacked.

As George Balleine wrote in his The Bailiwick of Jersey, the trial gave a glimpse of life at the manor:

"Every day began with mass in the chapel. Twice a week the seigneur rode to town to perform his duties as Jurat. When at home he worked with his men in the fields or went out fishing at St Catherine. In the evening he played chess. For his younger guests he had a fives court in the barn. He took great pride in his gardens, and every visitor was taken to admire them. He kept open house, and even the most unwelcome guest was expected to stay for dinner."

At his trial he was acquitted, thanks largely to his gallant young wife, a woman of 22, who stood up for a day and a half of gruelling cross-examination. Unfortunately the account of his trial is incomplete.

The fifth Lempriere seigneur died without leaving successors, and the manor passed to his sister, who had married a Guernsey Jurat called Perrin. His family held the manor for a further five generations before Abraham Perrin sold it to Philippe de Carteret of St Ouen. His family held it until 1735 when it passed back to the Lempriere family by marriage.

Today it is still in the hands of the Lempriere-Robin family, thanks to a name change by the seigneur who inherited it in the 1930s.

Click on any image to see a larger version