Rue du Crocquet or the High Street, St Aubin, is one of the most historic and picturesque streets in Jersey.

The history of Rue du Crocquet, its properties and inhabitants, is inextricably linked with the history of St Aubin, which was the principal port of the Island until the 19th century. Many of the people living in St Aubin would have been merchants and possibly privateers – families who owed their fortunes to the sea.

The St Aubin’s fishing fleet was part of the cod trade between Jersey and Newfoundland as early as the 16th century. In the early 17th century Jersey’s fleet would have wintered at St Malo as there was no protective harbour in the Island.

Work on piers at St Aubin’s Fort and the South and North piers of the current harbour in the 17th and 18th centuries meant that the ships could be anchored in St Aubin for the Winter months. As a consequence the majority of shipping in the Island moved to this area.

Merchants began to build their houses in St Aubin and the town grew in both size and importance. Whilst St Aubin had its own market, first mentioned in States Minutes of 1584, the main Island market and Courts were located in St Helier.

As shipping was concentrated at St Aubin the route between the town and St Helier became a vital link. In the 19th century the railway became the key link from St Aubin to St Helier. The line was opened in 1870 with the grand Terminus Station and Hotel located on the site of the present Parish Hall. The Hotel was bought by the Parish in 1946 for £2,000 and has been used as the Parish Hall since this date.

The importance of mercantile trade in St Aubin led to the establishment of a number of shipbuilding yards in the area such as Sauvage, Giffard and Laurens and Laings. During the 18th century a ropewalk was established on the Rue du Crocquet and a number of individuals living the area would have worked in the shipbuilding industry.

It is against this background of mercantile growth and shipbuilding that many of the properties in Rue du Crocquet were built. The earliest houses in the street are thought to date from the first half of the 17th century and are mainly concentrated at the bottom of the hill. The 1795 Richmond map of Jersey shows many of the houses that are still located in Rue du Crocquet today. The map also highlights the fact that the current road along the bay between St Aubin and La Haule Hill was built after 1795 and the main route to St Helier from St Aubin would have been up the Rue du Crocquet or the Rue St Aubin as it was originally called.

Work on what is now the main road, still called, La Neuve Route, began in the early 19th century. The 1849 Godfray map shows the new road in place. The Trafalgar, formerly known as The Swan, is located on the corner at the bottom of Rue du Crocquet. A date stone of 1624 has been found near The Trafalgar showing early evidence of properties in the area. By the 18th century this property was owned by the Benest Family who, in 1788 started the first omnibus service from Water Lane in St Helier (now Seale Street) to the Hotel.

The Hotel was run by various individuals during the 19th century – including Hannah Morse and her daughter Sarah Ann and Albert and Alice Harnett who are listed as the proprietors of the Hotel on the 1901 census.

Further up the Rue du Crocquet and on the right hand side of the road are St Aubyn’s Hotel Apartments. Part of the building in which the apartments are now located was once a private house known as L’Anciennette – the home of Jean Janvrin who conducted a prosperous trans-Atlantic business. The house had been bought in 1803 by Jean from Thomas Pipon’s creditors. Pipon had gone bankrupt and the house was sold into the Janvrin family in order to help him pay his debts.

The 1803 contract shows that at this date the new road to the east of the Rue du Crocquet had not yet been built as the property has rights of access to the sea on the east side.

A few doors up from what was the Janvrin residence is the Peterborough Guest House. The house was the birth place in 1806 of François Jeune, who later became Dean of Jersey and Bishop of Peterborough. François’ family had been amongst the earliest supporters of Methodism in the Island and his grandfather, also François, started an early meeting house for Methodists in St Aubin in the late 18th century.

Peterborough later became the residence of the de Ste Croix family and in the 1891 census we can see Philip de Ste Croix, a master mariner, living in the property with his daughter and granddaughter.

Other notable properties in the High Street include L’Armistice, which has a gable stone dated 1700 with the initials FK, which are thought to relate to François Kastel who is linked with Jean Martel of Martel brandy fame.

Nearby The Hollies also has an early date stone from 1685. The occupations of the 19th century residents of The Hollies reflect the importance of the shipbuilding industry in the area - in 1871 Paul O Dart, a master carpenter employing 4 men and 1 boy is living at the Hollies with Elizabeth his wife and their 7 children. By 1891 Elizabeth Dart is widowed and is living with Georgie and Hubert, two of her sons, both carpenters. 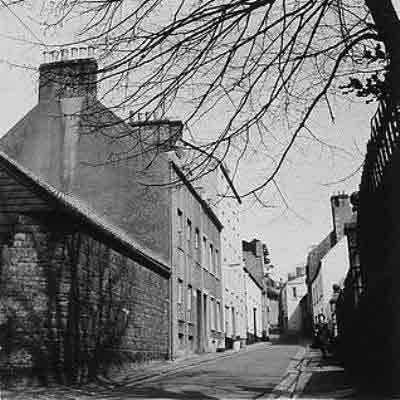 Next to the Hollies is a property called Ty Anna, with a date stone inscribed RRB MDC 1715. These initials stand for Raulin Robin and his second wife Marie de Carteret who were the grandparents of another famous St Aubin merchant - Charles Robin. Charles was born in St Aubin in 1743. His family were part of the Robin, Pipon and Company firm who traded with Newfoundland.

In 1766 Charles first visited the Gaspé peninsula in Canada and started to develop trade in this area. The family business grew and by 1783 the business was divided between the Newfoundland trade and the Canadian business which was handled by a new firm – Charles Robin and Company. Charles had significant success in the Gaspé and in 1802 returned to Jersey. He settled on Rue du Crocquet at St Magloire and made alterations to the original house between 1802–1820, when he added a large drawing room. Charles never married and died in 1824 leaving 480 livres to the poor of the Parish. 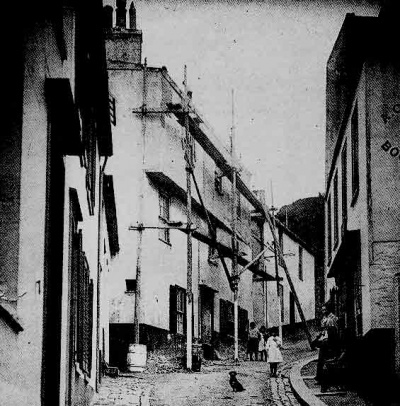 At the top end of Rue du Crocquet is the Hotel La Tour. Part of the current hotel was originally a private house called Maison de Martel, once the property of Philip Martel and one of the oldest houses at the top of the street. When Philip went bankrupt in 1751 the property was taken over by Philip Marett of St Lawrence who left it to his daughter Anne. Anne sold the house to William Brine whose family already owned property in the area.

William’s eldest daughter Esther married Philip Le Maistre who started a boarding school at Maison de Martel and built the school buildings and tower adjoining the house. During the 19th century the boarding school flourished under Philip and Esther’s son Reverend George Le Maistre. By 1871 the census shows that the school had 36 pupils as boarders from England, France and as far afield as the East Indies. The pupils were taught by four masters, including George Le Maistre as the Headmaster and also living at the school were a nurse and five domestic servants.

By 1881 the school was being run by John Este Vibert. John is described as a School Master and Meteorological Observer for the Board of Trade and is living with his wife Fanny and their two sons John and Arthur. John senior had attended University at Christchurch College, Cambridge, and following his time at Cambridge he went to Russia as tutor to Prince Vladimir Bariantinsky’s son. The Russian connection is strengthened as both Fanny and the couple’s two sons were born in the country.

The pupils at the school include boarders from India and China, reflecting the 19th century age of empire.

The property was eventually sold to John William Dart in 1895 who converted the school buildings into two houses. The properties became a hotel in the first half of the 20th century.