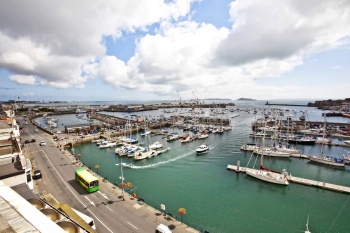 St Peter Port Harbour is the main harbour of the Bailiwick of Guernsey, and is dominated by Castle Cornet.

The first harbour in St Peter Port, known as the Old Harbour, was built in 1275, on the orders of Edward I.

In 1831, the Bailiff Daniel De Lisle Brock, established a States committee to investigate the building of a new harbour. Following years of debate about the plans and financing, a plan was approved by the States of Guernsey in 1851, and in 1853 the foundation stone of the new harbour was laid.

In 1974, a "Roll-on/Roll-off" car ferry terminal was introduced.

Between 1984 and 1989, the North Beach reclaimed a further 20 acres, extending the harbour as far as Salerie Corner. It created additional parking for St Peter Port on the quays, and a new marina, called QE2 Marina.