Carts laden with vraic collected off the coast at Le Hocq

The main use of vraic is for spreading over potato fields during the winter. It is then ploughed into the soil before the potatoes are planted in late winter and spring. Vraic was traditionally gathered by horse and cart in Grouville Bay and St Ouen's Bay, and in smaller quantities at Le Hocq and Havre des Pas. The practice continues using tractors and trailers, although the quantity taken has diminished over the years.

Over the years the sea has claimed the lives of many vraic collectors. Jersey's early burial registers rarely recorded anything other than the name of the deceased and some relationships, but there are frequent references to death by drowning, and many which add that the tragedy occurred while vraic was being collected. It was not uncommon for a party of several related vraic collectors to perish together, presumably when caught by the incoming tide; or perhaps when one or more non-swimmers tried in vain to save a drowning relative.

From Customs, Ceremonies and Traditions of the Channel Islands by Raoul Lempriere

For centuries seaweed has been used in the Channel Islands for manuring the land and is still used for that purpose, but to a far lesser extent than formerly.

In time past, vraicing was carried out on a tremendous scale and numerous vraicers, carts and even boats were employed to gather the harvest. The times of the year when vraic could be gathered were officially laid down, as they still are.

So eager were the vraic gatherers to obtain all they could that they would sometimes remain on the beach until the carts were floating and the horses swimming; they even carted the precious seaweed on their backs up cliff sides. The traditional vraicing carts, the four-pronged vraicing forks and the vraicing hooks are things of the past.

Whereas nowadays fresh vraic is spread on the land as manure, in time past it was sometimes burnt and the ashes spread on the land. Generally, farmers collected their own vraic, but there were some, as there were until recently, who gathered seaweed as an occupation. In the vicinity of La Pulente at the southern end of St Ouen's Bay in Jersey were to be seen stacks of vraic, which were sold by the gatherers for some pounds a piece.

The sight of a horse pulling a cart dripping with newly gathered vraic, rich brown and glistening, and with a vraic fork or two sticking out from the back of the load, has gone forever, as also the sound of cart¬wheels rumbling over the granite setts of a slipway.

Fortunately, such a sight has been preserved not only in photographs, but more especially in the etchings and paintings of Edmund Blampied; so well did he depict the subject that on looking at his vraicing scenes it is almost possible to smell the salt in one's nostrils. It should be mentioned that dried vraic was at one time used for fuel. 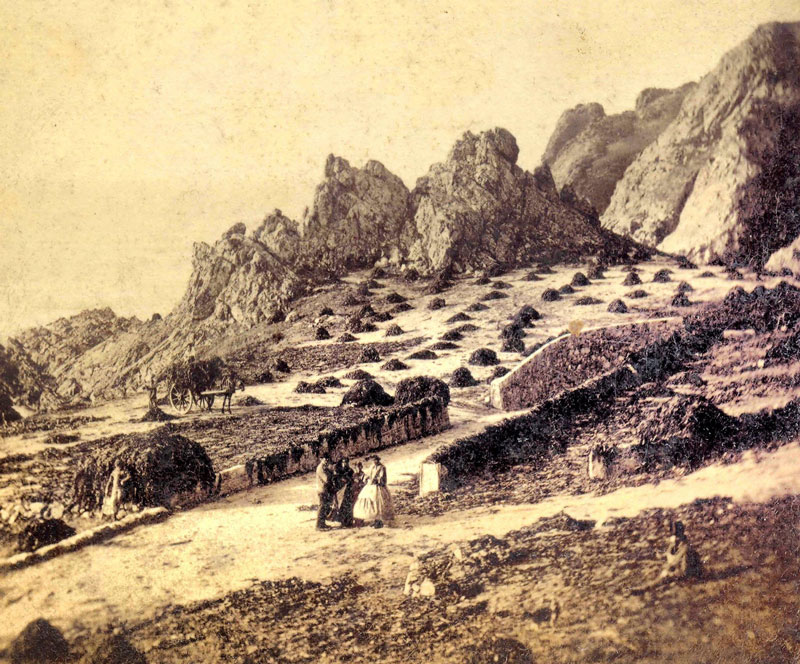 This is a 19th century picture of l'Etacq, in the north-west of the island, showing vraic being laid out to dry in neat, evenly-spaced mounds, and to the left of the picture a worker can be made out adding to a mound from seaweed brought there by horse and cart.

William Pleece wrote in 1813 in his An account of the island of Jersey:

"Though neither chalk, limestone, nor marle, has hitherto been discovered in the island, yet the Divine Goodness has not left Jersey without a substitute for other manure: this is sea weed, of different species of Algae, all called in the island by the general name of vraic. This marine vegetable grows luxuriantly on the rocks round the coast. It is gathered only at certain times, appointed by public authority. There are two seasons for cutting it: part is dried, and serves for fuel; after which the ashes are used for manure: part is spread, as fresh gathered, on the ground and ploughed in: it is likewise scattered in the same state over meadow land, and is said to promote the growth of grass: it may, perhaps, have this effect; but as the solar heat, and the frequent stormy winds, soon parch it, some of its salutary influence seems likely to be lost; and it appears probable, that a slight sprinkling of sea water would, though perhaps in a less degree, have a similar effect.

"Though regular vraicking is permitted only at stated times, yet, as in tempestuous weather large quantities are torn from the rocks, and drifted onshore, the farmers are at all times on the watch so that, even in the midst of winter, whole families, comprising men, women, and children, of both sexes, are seen raking together the highly prized boon of Neptune, and sometimes breast high in the water; vraicking, like a Catholic holiday, suspending all other secular employments.

"Stable dung was formerly so little esteemed, that it became necessary to pay for its removal: this prejudice is done away; and dung is now purchased as a desirable article of manure, by those who, not many years since, were paid for clearing it away. Vraic, amalgamated with stable dung, and suffered to rot, would doubtless form an excellent species of manure. Soot, coal ashes, and other substances of a similar nature, do not seem congenial to the soil of Jersey , which consists principally of a light friable earth ; though they might be useful to the stiff lands, or if mixed with other substances."

Henry Inglis wrote in 1834 in The Channel Islands : Jersey, Guernsey, Alderney etc. (the result of a two year residence) as follows:

Vraic as a manure, is quite as much prized in Alderney, as in the sister islands; and vraic-gathering is as important an affair.

Indeed, it is ushered in with greater solemnity in Alderney, than in either Jersey or Guernsey. The evening before that appointed for the vraic gathering, the church bell rings, at six o'clock; which is the signal for all who are interested in vraic-gathering - all the inhabitants of the island who are owners of land - to assemble in the church-yard; and there, the important point is discussed, whether all are ready to commence the next morning.

Any sufficient cause that might prevent any one individual from joining in the vraic-gathering, would be held a sufficient reason for postponing the day; because the liberty of gathering vraic is too valuable a privilege, to be unequally enjoyed. If no one demurs, the day is considered to be fixed; and all retire, to prepare, by an early retirement to rest, for the labours of the next morning. It chanced to be vraic-gathering when I visited Alderney ; and at high water, in the morning, the great bay fronting the south, was lined with a dense semi-circle of eager islanders, waiting the moment, when the retreating tide, should leave the rich prize within their reach.

In Alderney the great vraicing days had already come to an end by about 1898.

Click on any image to see a larger version 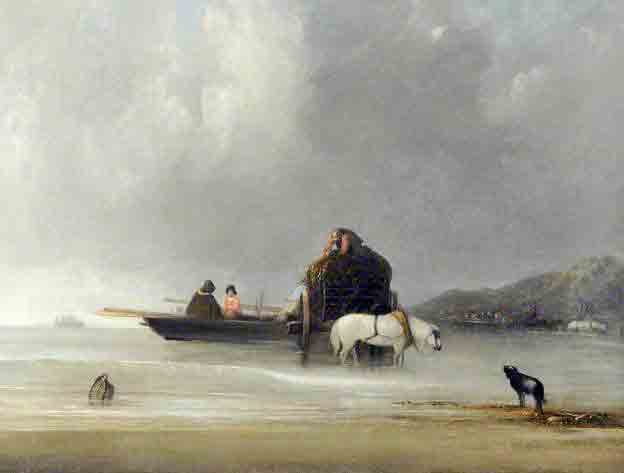 Vraic Gatherers. Ever a popular subject for Jersey artists, this version by John Le Capelain forms part of the Town Hall art collection. A number of watercolours by Le Capelain are not on public display in the Assembly Room but are in a committee room 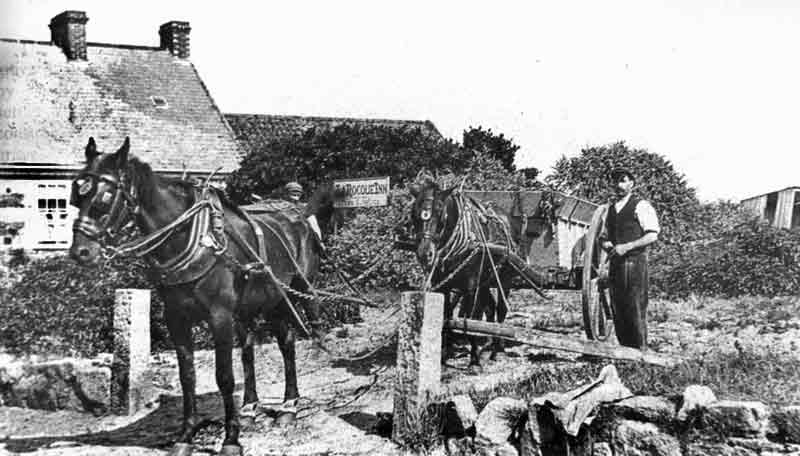 At La Rocque. A cart laden with wet seaweed could be very heavy and two horses are here being used to pull it