When the Clameur de Haro was raised to save a tree 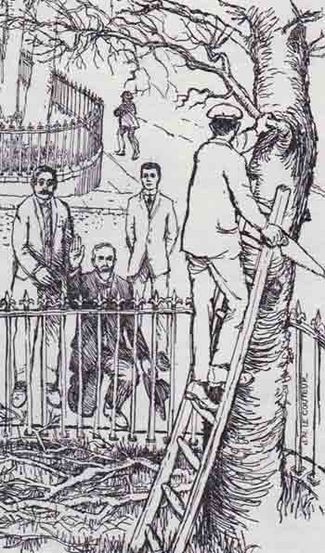 The Duchy of Normandy was founded by Rollo the Dane in 912 AD after he had captured Rouen and besieged Paris.

Charles the Simple, King of France, made peace and offered Rollo the provinces of the west, and his daughter Giles to wife. Rollo became a Christian and distributed among his followers the lands he had conquered, and thus established a feudal system. He enacted laws of such great severity for the maintenance of order and the respect of property, that his name became a terror to wrong-doers, whether of high or low estate.

An appeal to Rollo ensured swift and certain justice. The word Haro is an abbreviation of the words AH Rou, which was the name by which that duke was really called. The Clameur de Haro and its invocation Haro! Haro! Haro! à l' aide mon Prince, on me fait tort is still today recognised by the law of Jersey, to stay the hand of the man who would do wrong to his neighbour's property.

An interesting instance of the exercise of this ancient custom took place on 20 January 1908, when Mr John Mollet raised the Clameur and it was received with all the respect and obedience of yore.

Mr John Mollet, the Commis au Greffe of the Royal Court, owner of one of the houses of the Royal Crescent, St Helier, was on his way home in the lunch hour, when he found that workmen were engaged in cutting down one of the fine old oaks, more than 20 of which were situated in front of the Crescent, and which had been standing for over 80 years. The work was being carried out on the instructions of another proprietor, and Mr Mollet, considering it would be to the prejudice of all the Royal Crescent proprietors, deemed it his duty to protest.

He at once consulted with another proprietor, Mr F B Le Cocq, who confirmed that the trees and lawn in front of the Crescent were held in common by all the proprietors and urged Mr Mollet to stop the trespass by raising the Clameur, which, in the circumstances, was the only procedure to adopt. Mr Mollet said that it was necessary to have witnesses, so Mr Le Cocq said he would stand by, as did also Mr Ralph Mollet, the son of Mr John Mollet.

Another neighbour, Mr John Ph Tocque, an old gentleman, who was passing at the time, was invited to witness the raising of the Clameur, but he stoutly refused to be mixed up in a lawsuit and hurriedly walked away.

Mr Mollet then approached the tree with his witnesses, and in the time-honoured fashion, he kneeling on one knee, exclaimed in a loud voice: Haro ! Haro ! Haro ! à l'aide, mon Prince. On me fait tort, the witnesses standing with heads uncovered.

The effect was instantaneous. The workmen dropped their tools and the cutting down operations were at once suspended. Passers-by and school children quickly congregated in silence. The King's authority had been involved, and the King would have to intervene.

Mr Mollet then made his way to the office of Mr Malet de Carteret, the Procureur General du Roi (His Majesty's Attorney General) and reported the matter to him. The Procureur informed Mr Mollet that he should instruct an Advocate to draw up the necessary summons, which he, the Procureur, signed.

Advocate E T Nicolle was instructed, and the case came before the Royal Court. The defendant came to Court and admitted that he had wrongfully cut the tree. The Royal Court fined him 60 sols and costs, declaring that the "Clameur de Haro " had been rightfully raised.

(Note: The year of Normandy’s foundation is now generally accepted as 911AD, and the 1,100th anniversary is being celebrated in 2011)
Retrieved from "http://www.theislandwiki.org/index.php/When_the_Clameur_de_Haro_was_raised_to_save_a_tree"