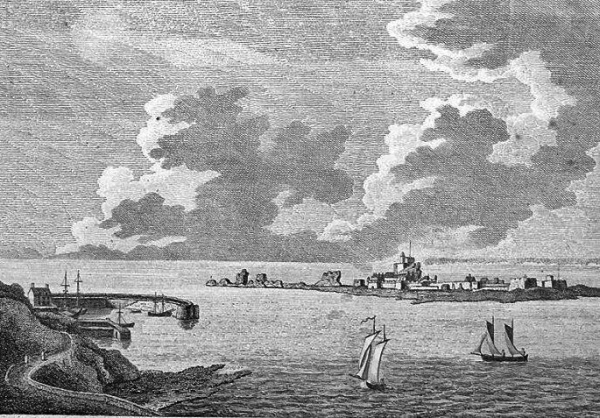 Elizabeth Castle and the tiny Havre Neuf in 1786

Elizabeth Castle was built on a tidal island off the coast of Saint Helier in the 16th and 17th centuries when the power of cannons meant that the existing stronghold at Mont Orgueil was insufficient to defend the Island and the port of St Helier was vulnerable to attack by ships.

Elizabeth Castle. About half a mile out to sea from St Helier lies an islet 60 yards broad and about 500 yards long, which can be reached at low tide by a causeway of shingle across the sands. For 400 years this contained a priory, and for the last 350 years a castle.

The island called L'Islet at the eastern end of St Aubin's Bay became the site of the Abbey (later Priory) of Saint Helier. The monastic buildings were finally taken over by the Crown at the Reformation. Surviving buildings were used for military purposes.

Construction of the castle began in 1594, and continued in the first years of the 17th century under the then governor of Jersey, Sir Walter Raleigh, who named it "Fort Isabella Bellissima" (the most beautiful Elizabeth) after Elizabeth I.

Governors of Jersey moved their official residence from Mont Orgueil to Elizabeth Castle, which was first used in a military context during the English Civil War in the 17th century. Charles II visited the castle in 1646 and 1649, staying in the Governor's House, and was proclaimed King on the death of his father, Charles I, by governor Sir George de Carteret despite the abolition of the monarchy in England.

In 1651, Parliamentary forces landed in Jersey and bombarded the castle with mortars. The destruction of the mediaeval Abbey church in the heart of the castle complex which had been used as the storehouse for ammunition and provisions forced Carteret to surrender, and Jersey was held by Parliamentarians for nine years. The parade ground and surrounding buildings were constructed on the site of the destroyed Abbey church.

The castle was next involved in conflict in the late 18th century, this time it was with the French. Troops under Baron Phillipe de Rullecourt landed in St Helier on 6 January 1781, and the castle garrison was marooned. The governor, Moise Corbet, was tricked into surrendering to the French, but the castle garrison under Captain Mulcaster refused to surrender. The French were eventually defeated by troops under Major Francis Peirson at the Battle of Jersey. Both Peirson and de Rullecourt were killed during the battle.

The perceived vulnerability of the Island led to the construction of Fort Regent on Le Mont de la Ville, overlooking the Town. Fort Regent became the site of the main British garrison. 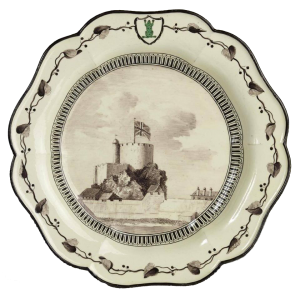 The castle depicted on a Wedgewood plate in the 1770s

An ambitious harbour project which would have linked the castle to the mainland was abandoned in the 19th century. A breakwater linking L'Islet to the Hermitage Rock on which the Hermitage of Saint Helier is built remains, and is used by anglers.

The British government withdrew the garrison and relinquished the castle in 1923 to the States of Jersey which opened it to the public as a museum. During the Second World War the Germans modernised the castle with guns, bunkers and battlements. After the Liberation, the castle was repaired and was eventually reopened to the public.

Today, the castle is administered by the Jersey Heritage Trust as a museum site: among the historical displays are the Jersey Royal Militia Museum holding several centuries of military memorabilia. Every Sunday through the season when the castle is open, a team of historical interpreters recreate the garrison of 1781, at the time of the battle of Jersey. Displays are given of musket firing, cannon firing and civilian life.

A booklet written by Norman Rybot in 1934 covered various aspects of the history of Elizabeth Castle, and included a translation of a French history of Saint Helier. Here are links to the chapters of the booklet:

The castle is home to a small selection of paintings from the Jersey Heritage collection, featured in the Your Paintings project.

Click on any image to see a full-size version 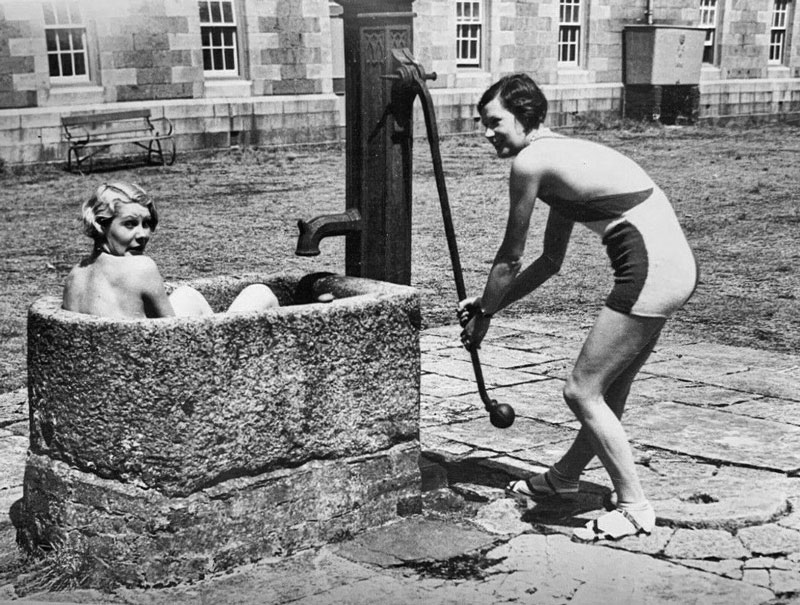 Two young ladies having fun with the castle pump in 1933

These two photographs were taken around 1872, when work was under way to construct a new and massive harbour for St Helier. One arm was built out from Elizabeth Castle, bridging the gap to the Hermitage Rock and then heading out to sea. That was completed. The other arm, from La Collette, was repeatedly damaged by winter storms before much progress could be made and the whole project was abandoned. These picture were taken while work was under way outside the castle and show temporary buildings which were part of the construction site. In the foreground on the left is a large basin which was probably the inner section of the castle's harbour, little of which now remains. It appears that a retaining wall was built to keep the tide out and the whole area was soon filled in, as shown on the right, to create an open space where the giant blocks which would be used to build the breakwater could be constructed and stored

And a collection of artists' impressions from previous centuries 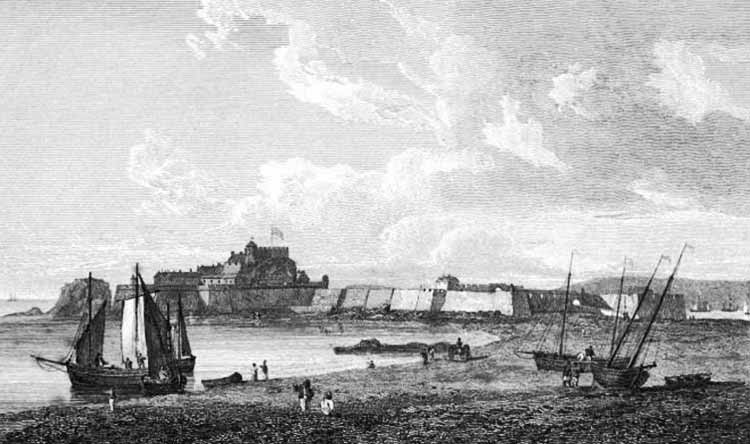 A painting by J Young 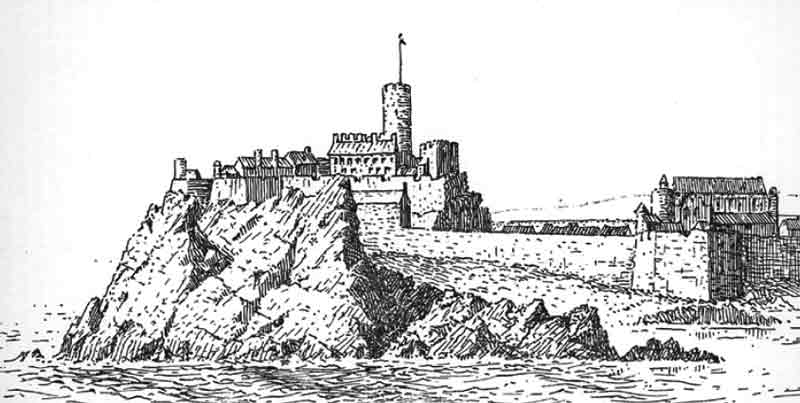 An unusual view of the castle, its small harbour and breakwater, taken from the Hermitage 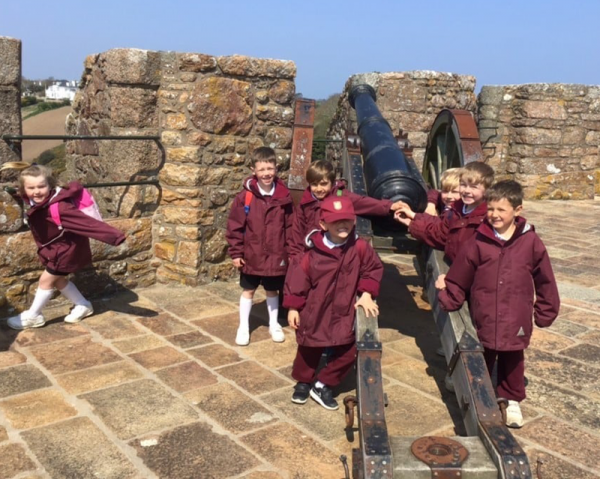 A school outing to the castle

After the German Occupation and Liberation the castle was formally returned to the people of Jersey in a ceremony held in 1946, when the structures added by the occupying force also became apparent for the first time, as shown in these Evening Post photographs 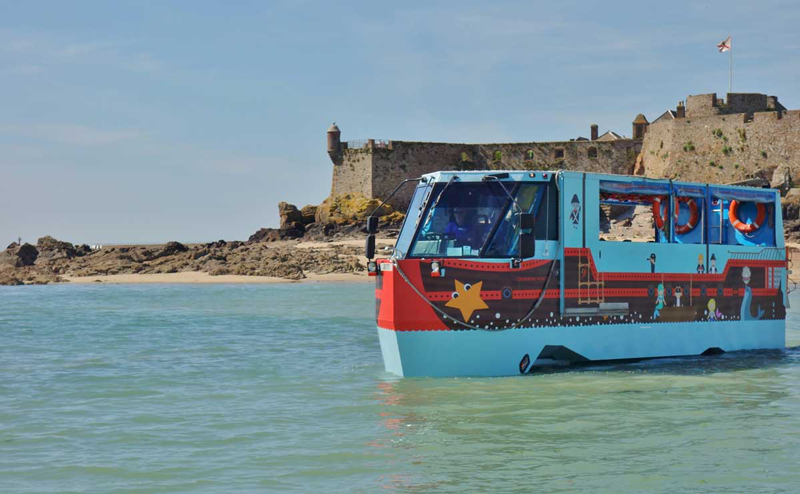