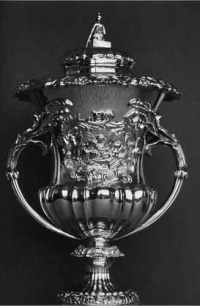 George Symes Hooper was born on 20 October 1799 in St Helier. He obtained his MD in Paris in 1823 at the age of 24 and became one of the leading surgeons in the Island.

On 6 July 1829 he married Julia, the second daughter of Minchin Lucas of Dublin; Julia was born on 16 October 1809. In 1832 he was Secretary to The Jersey Board of Health and played a prominent part in combatting the Asiatic cholera plague in the Island. As a result, the Island presented him with a magnificent silver cup. The inscriptions are notable for the different script styles utilised on each line.

“We are also sorry to have to announce the death of Dr George Symes Hooper who was very well known on the island. The deceased who had been ailing for some time past died rather suddenly yesterday at the advanced age of 79.”