1820 is the earliest date for which records of the company's activities still exist.

The founder, whose portrait hangs on the wall of the present boardroom and is shown in the company logo, was Thomas Aubin. His nephew, Philip Germain, joined him in the business on leaving school and it was from Philip's son, John Francis, and his son John Philip, that the company took its present name during the 1920s.

John Philip's two sons joined him in the business, as did their own sons, so bringing us to the present day. 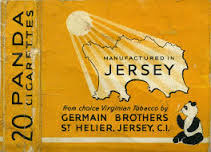 The business has been both a partnership and solely-owned over the years, and is now a privately-owned limited liability company.

The modern tobacco factory stands on the original site and much of the building still dates from the first development.

Lacking a deep-water port on Jersey's south coast, at the beginning of the 19th century a new Quai des Marchands - Merchants Quay - was developed on the foreshore of St Helier and warehouses constructed to form Commercial Buildings. Ships would lie alongside the quay across the road from the warehouses and the deeds of the properties still show rights of access over the quay to load and unload from shipping, although the moorings are now given over to pleasure craft and the former warehouses across the Old Harbour on the New North Quay are now an award-winning Maritime Museum.

Leaf tobacco still arrives at the same place in hogsheads, bales and cases by sea from Rotterdam, even though the transport is faster and the original factory was rebuilt in the 1960s: the rearmost part of the present building is original and built of local granite. On the top floor there still exists the wooden jib-crane which hoisted goods to the loading doors on each floor; now out of use. 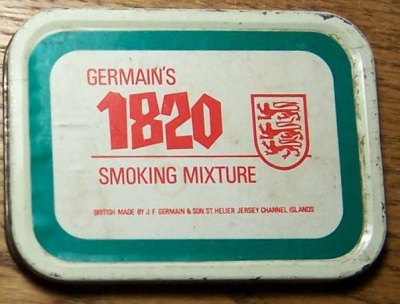 In the early part of the 19th century the principal business was in the supply of the requirements of sailing vessels trading to and from Jersey. Vessels plied between Jersey and France, the other Channel Islands and the British Isles, bringing coal and iron for the ship-building industries and all supplies in which the Island was not self-sufficient. They took away local produce to the markets and often young Islanders setting off to make their fortunes: Channel Islands names feature strongly in parts of Australia, South Africa and particularly Canada.

The Canadian connection came about in the pursuit of `King Cod' on the great fishing grounds. Fleets of Jersey vessels fished out on those grounds and had to be supplied: also their catch needed to find a market. When the ships which Thomas Aubin provisioned returned to the island, sometimes they brought back tobacco which they had collected when trading down the western seaboard before making the long haul back across the Atlantic.

Soon the manufacturing of this raw leaf tobacco became the mainstay of the business. For the rest of the 19th and the early part of the 20th centuries the business continued along the same lines, seeing the introduction of Revenue Duties on tobacco (the business pre-dates the Bureau des Impôts - the island's Customs authority)and a new type of customer in the form of retired Officers from the Indian Service who found the weather more congenial than in England.

The Second World War saw the island forced onto its own resources and enterprising local farmers grew their own tobacco leaf (with varying degrees of success) which they would bring to the factory on the harbour to be made up into something smokeable .If a customer could provide enough leaf, he could have it made especially for him, otherwise it all went in together and he took `pot-luck' on the outcome! Even German troops would occasionally appear, much to the alarm of the proprietors and staff, for whom any visit from the Occupying Forces was not generally a good omen!

The late Arthur Germain recalled the occasion when an irate Military Policeman appeared - although everyone feared the worst it transpired that his crop of tobacco leaf had mysteriously vanished and he was hoping to identify it and Arthur never forgot the expression on the soldier's face when shown the factory floor spread with leaves of every shade and shape.

The years after the war saw the gradual lessening of the austerity of rationing and people began to once again take holidays: many of those with young families wanted a half-way place both `at home' and at the same time `abroad' and the islands began their boom years of tourism. The concept of `Duty Free' goods no longer simply meant `smuggled' and as almost every adult smoked, both manufacture and imports of cigars and cigarettes rose to meet demand.