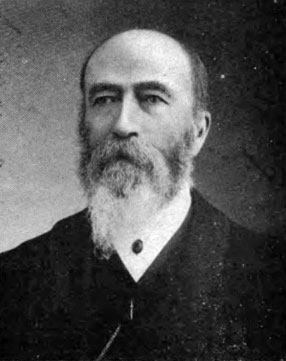 Josue George Falle (1820-1905) ran the merchants and shipowners business established in Newfoundland by his uncles before returning to Jersey a wealthy man, to become a Deputy, Constable and eventually to follow his father as a Jurat.

The son of Josue Falle of Hambie, St Saviour, and Esther Bertram, daughter of George, he was born in 1820, and baptised at St Saviour.

The Falles had been engaged in the Newfoundland cod fisheries from 1795, and the firm of Richard Falle and Co, shipowners and merchants, was founded at Point George, Little Burin, about 1834 by Josue's two uncles, Richard and Elie Falle. In 1838 they took their nephew into the firm, and, when both were lost at sea while crossing with cod to Oporto, he remained in control of the business.

In 1848 he became Member for Burin in the Newfoundland House of Assembly.

Some years later he returned to Jersey, leaving two nephews in charge of the business, and married Marie Elizabeth Godfray, daughter of Advocate Francois Godfray. He was now a handsome and wealthy man who was generally seen astride a powerful horse.

In 1864 he became Deputy of St Helier, and, though later a staunch conservative, he won his seat on a reform programme. Nine months afterwards he was elected Constable.

"He was", wrote Durell, "one of the most distinguished constables the Town has ever had. Social prestige is not everything; but it forms a splendid background for an intelligent, hardworking, and painstaking administrator".

He held this post for nine years, and during his tenure of office the Town Hall was built, the Lower People's Park laid out, and the Town Church restored. In 1875 the prestige of the Bench of Jurats was badly shaken by the sentencing of Jurat Josue Le Bailly to five years' penal servitude for embezzling the funds of the Mercantile Union Bank of which he was chairman.

It was necessary to choose someone to take his place who would inspire confidence. Falle was the man chosen, and his election was almost unanimous, only two votes in the whole island being cast against him. For the next 30 years he was leader of the conservative party in the States, strenuously resisting any tampering with the ancient constitution of the island, either on the part of the British Government or of local reformers.

He crushingly defeated proposals to allow the use of English in debates, to exclude the Rectors from the Assembly, and every suggestion of this kind, and he was largely the instigator of the long and expensive fight with the Home authorities over the presidency of the Prison Board.

But he was not entirely averse to change. The island owes to him the Law on the Willing of Realty, which enables an owner to will as he likes property he himself has bought. The Jersey Times said at his death :

"He was a keen debater, always watching for weak points in his adversary's armour. Sarcastic, he could make his opponents wince under shafts from a never empty quiver; and he interspersed his oratory with apt quotations which always told, and his intimate knowledge of Shakespeare enabled him to draw from a never-failing source".

Some of his work was done as President of the Harbours Committee. "I was told", wrote DureIl, "by Mr Knipple, the engineer, who was in the habit of appearing before committees and harbour boards all over the Empire, that he had never seen a chairman manage a committee with more tact and judgement, with more knowledge of detail, with more dignity and general aptitude".

At the outbreak of the South African War he persuaded the States to vote £5,000 for the purchase of a field battery of artillery, and he personally added £500 to this gift. In 1887 he had advocated the building of a Museum and Art Gallery in the Royal Square to commemorate the Queen's Jubilee, and, when this proposal came to nothing, he presented in 1895 to the Societe Jersiaise the usufruct of the magnificently built granite house in Pier Road to contain its treasures.

He died in Plaisance, his home, on 15 February 1905, aged 82. He left two daughters, Rozel and Lily, and a son Bertram Godfray, who in 1910 became MP for Portsmouth, and in 1954 was created Baron Portsea of Portsmouth.