Run by Jenny Margaret Benest (1892-1973), daughter of William Le Bas Benest (1848-1931) and his second wife Louisa Margaret Le Sueur (1866-1936), Miss Benest's School was typical of a number of small schools in the mid-20th century which provided an academic start for children under primary school age.

Jenny Benest started working as a school teacher in a school at First Tower run by a Miss Le Brun, and continued on her own after Miss Le Brun's retirement at her parents' home, Vallum House. She ran this school in a single room until shortly before her death at the age of 81 in 1973.

Among her pupils was Jerripedia founder Mike Bisson, who recalls his time at the school:

"I must have started with Miss Benest at about the age of four, in 1953. I recall being dropped off at Vallum House by my father, on his way to work, and being collected again when he returned to our house at Millbrook for lunch. I think school was mornings only to begin with, but soon developed into a full day.

"Miss Benest gave me a wonderful start to my education before I moved on to First Tower School after a couple of years. What is remarkable, looking back to that time, is that lessons at Vallum House included French, which I was not to study again until I reached Victoria College at the age of 11.

"I recall being part of a very small class held in a single room on the St Aubin's Road side of Vallum House. Even at such an early age the curriculum was completely academic. It was only in my first terms at First Tower than an element of play was introduced into school life, which left me so frustrated after the start I received at Miss Benest's that I was soon pushing, with the innocence of extreme youth, and the vociferous encouragement of my mother (successfully, I recall) to be allowed to advance to a more academic class.

"I have never known anything more about 'Miss Benest' until I came across her while researching a family tree for Jerripedia." 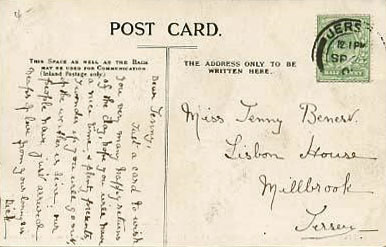 A postcard sent to Jenny Benest at home in 1905
Retrieved from "http://theislandwiki.org/index.php/Miss_Benest%27s_School,_First_Tower"