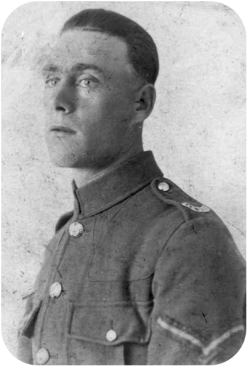 Hubert Charles James Newman, who was the son of George Willoughby Augustus Newman and Elizabeth Mary Ann, (nee Mitchelmore). George was in the army and was posted to Jersey. He was born in Somerset and Elizabeth in Devon. Hubert was the seventh of eight children, five of them born in Jersey. The fifth child, Richard, stayed in Jersey and was a postman. The youngest, John, joined the army as a boy soldier in Jersey and fought throughout the Great War. Hubert is believed to have emigrated to Australia

Direct links to lists of baptisms, marriages and burials for the Newman family can be found under Family Records opposite. If you want to search for records for a spelling variant of Newman, or for any other family name, just click below on the first letter of the family name you are interested in. This will open a new tab in your browser giving you a list of family names beginning with that letter, for which there are baptism records in our database of half a million church and public registry records.

If you can help with information about the Newman family, please contact editcontact@theislandwiki.org, using Jerripedia as the subject of your email. We are particularly interested in information which will help create further family trees, family histories and photographs

Quite simply someone new to a particular place, from the Anglo-Saxon neowe and mann