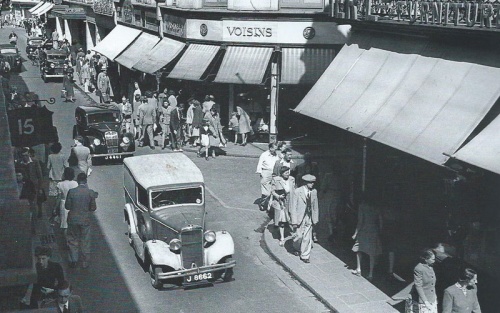 For a short time during and either side of the Occupation, Voisin's occupied No 20, on the corner with Don Street, as well as the row of shops further down King Street

No 20 King Street makes the north-west corner with Don Street, and it was occupied by Voisin and Company, and formed part of their department store, for over 30 years from the late 1930s, it was then home to Tyler's shoes and later to clothing outlets.

As did many King Street premises, No 20 started life as a grocery and wines and spirits merchant, run by Charles Kaines, as shown in an 1834 trades directory. It soon changed to the other King Street favourite, a drapery, and remained so under various owners until 1940, when Voisin's took over.

At the same time, as were many King Street properties, it was home to a milliner (Miss Marett), presumably working from an upper floor.

Online family trees suggest that Charles was born in Jersey in about 1814, but there is no record of a baptism. However, the record of his marriage to Mary in 1833 shows that he was born in Guernsey and Mary in St Helier.

Richard Newman was the first draper and is shown in the 1841 census aged 25, living with his wife Jane (20) and two shopmen

Henry Beard (1827-1878) followed, and is shown at No 20 in the 1851 census with his sister Ann. His stay in Jersey must have been very short-lived because he was born in London and still living there at the time of the 1841 census. He married in England in 1852 to Ann Sarah Edwards (1826-1879) and their daughter Theresa was born the following year in Melbourne, Australia. Was there some connection between the Kaines and Beard families?

The 1861 census shows draper Philip Pallot (1827- ) in residence with his mother Elizabeth (1799- ), nee Vaudin. They were both born in Trinity. Philip was baptised Philippe and was two years older than shown in the census. 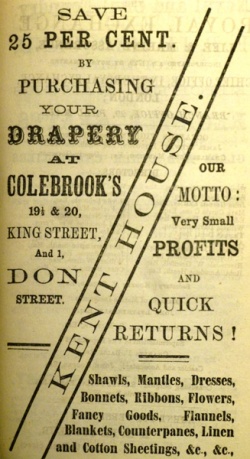 Identifying W E Colebrook through census returns and online trees has proved highly problematical because of errors in those trees. The most comprehensive shows a Walter Evelegh Colebrook, born in Shropham, Norfolk, in 1857, and brought to Jersey by his parents Walter Thomas and Ann Budd before he was two. His two brothers were born in the island in 1859 and 1860. Walter Evelegh could certainly have gone into business as a draper by 1880, but family trees show that his only son was Alan, born in 1889, which makes it difficult to understand how he could have been the 'and son' of a business which closed some 16 years later. In addition, the probate for his will shows that Walter Evelegh died in 1895.

Additionally, Jersey census records show that Walter Evelegh Colebrook was born in Ludlow, Shropshire, not Shropham, Norfolk, and that he was alive and well in 1901, working as a cycle dealer, and in 1911, working as a 'cycle engine dealer'.

We think that the explanation for this is that Walter Colebrook snr was not Walter Thomas, but another Walter E, and that it was he who opened the drapery, and he who died in 1895, according to will probate records. The 1861 census shows him living at Euston Place, Roseville Street, with his wife Ann, four step-children and three sons. Walter (no middle initial) is shown as a draper and silk mercer employing 'eight hands'. His eldest son is also shown as Walter without a middle initial.

The 1871 census shows Walter E Colebrook, a draper born in Kent, wife Ann and three sons, the eldest being another Walter E Colebrook, born in Shropshire. He must have been Walter Evelegh Colebrook, the 'and son' part of the business, who is shown in the 1891 census as head of his own household with wife Emily and three young children. Walter was described in the census as a draper and must have switched from drapery to the profitable business of cycle dealerships in the final decade of the century. He seems to have kept the drapery business going in King Street until at least 1905, because it appears in that year's almanac.

The advertisement below is also somewhat confusing, because it shows the business trading from 19½ and 20 King Street, which should, according to the numbering system, be on opposite sides of the street. We have been unable to discover any other reference to No 19½. The Colebrooks did not live in King Street, but in Roseville Street, Clarendon Road and then in St Saviour.

A H Samson was Alfred Henry Samson, the youngest of 13 children of Auguste Samson and Jane Elizabeth du Feu. He was born in St Helier in 1865 and married Alice Jane Unknown in about 1890. They had a son, Clyde Alfred, in 1891. 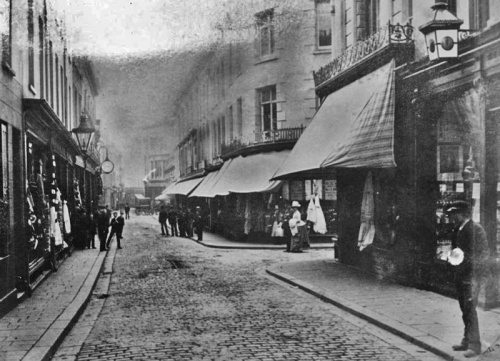 No 20 in 1890, making the corner after Don Street on the right, was home to Colebrook's drapery. Most of the shops on the right, north side of the street, had blinds to protect their window displays from the sun

Where a single date is given, this is the earliest known for this occupant