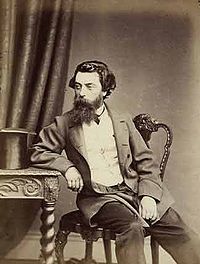 A portrait of the artist held in the National Portrait Gallery

Paul Jacob Naftel (1817-1891) was a Guernsey born artist and teacher. He specialised in watercolour landscapes, and was Guernsey's most famous and successful artist of the time.

Naftel was born in Guernsey on 13 October 1817, the son of Paul Naftel (1795–1870) and his wife, Sophia Bird. His father was a clockmaker and watchmaker, but he also sold artists' materials and prints. Although neither of his parents were artistic Naftel stared drawing and painting at an early age. He decided to become a professional artist and earned a living by giving art lessons at various schools on Guernsey, and in 1847 he was finally appointed drawing-master at Elizabeth College where he taught for the next thirteen years. His inspiration in his early works were the water lanes and scenery of the island. These early works were remarkable for ‘an extremely lavish use of body colour’ (J L Roget, A history of the ‘Old Water-Colour’ Society, 2 vols. (1891)). Woodcuts made from his paintings were used to illustrate the book The Channel Islands (1862) by D T Ansted and R G Latham.

Naftel married twice. His first wife was Elizabeth Robilliard (1810–1849) of Alderney. After their marriage they lived in the Grange. Following Elizabeth's death he married Isabel Oakley, an artist in her own right, and the youngest daughter of watercolourist Octavius Oakley who had visited the island in 1844. Paul and Isabel married in Surrey in 1856. They had two sons, Cecil Oakley (1845- ) and Percy Hartley (1859- ), and a daughter Maud (b1856) who also became an accomplished artist. Naftel had a studio at his home, Millmount in St Peter Port, where he held private views of his work.

Naftel's watercolours began to gain an audience outside the islands and he was elected an associate of the Society of Painters in Water Colours on 11 February 1856. Three years later (on 13 June 1859)he became a full member. He contributed greatly to the to the society's exhibitions and showed 689 works between 1840 and his death. Although Guernsey views were his speciality he travelled widely, throughout Britain, but also in Switzerland, Spain and Italy. He produced and exhibited works from these experiences. 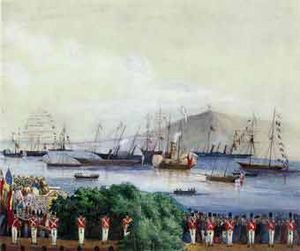 He lived in Guernsey until the end of 1870 when he moved to London (4 St Stephen's Square, Westbourne Park).He was a succesful teacher both in Guernsey and London - amongst his pupils was the landscape painter Kate Prentice. He lived at Westbourne park until about 1884 when he moved to Chelsea and eventually to 1 Walpole Gardens, Strawberry Hill where he died on 13 September 1891. He was buried three days later at Holy Trinity, Twickenham.