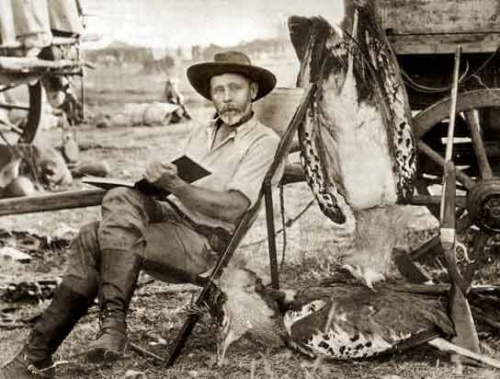 Although George Balleine’s A Biographical Dictionary of Jersey is generally very accurate and contains biographies only of those born in Jersey or with very strong Jersey connections, it is not clear why he chose to include biographies of three members of the Selous (or Slous) family.

It seems unlikely that any of Angiolo Robson Selous, his brother, artist Henry Courteney Selous, or Henry’s son Frederick Courtenay Selous, an explorer and big game hunter, was born in Jersey.

And although Balleine describes Angiolo and Henry’s parents, Gideon Selous and Sophia Anne Lokes, as ‘of La Moye, Jersey’ it is also far from certain that Gideon, or his father George, was born in the island. Their names do not appear in the Jersey baptism registers.

However, the inclusion of this article on the family in Jerripedia is well justified, not just because the family undoubtedly had its roots in Jersey, but because its members led very interesting lives in London, and attempting to unravel their ancestry has proved to be a classic example of the detective work which is often required by researchers trying to bridge the gap to their family’s ancestral home.

Gideon Slous was a painter of miniatures in London in the mid-19th century.

Although an online biography of his son Henry describes his wife Sophie Ann Lokes as a native of St Helier, she and Gideon do not appear to have married in Jersey and there is no record of her baptism in St Helier.

Balleine suggests that the family name was Slous and that the brothers Angiolo and Frederick changed the spelling. Although both spellings can be found in the Jersey registers, Selous is by far the most common, and is perpetuated today in the name of St Lawrence crossroads, Carrefour Selous.

A family tree obtained by Jerripedia suggests that Gideon and his descendants were all born in London. No birthplace is given for Gideon’s father George, although it is suggested that his father Philippe may have originated in Jersey. If he was born around 1700, as the tree suggests, there is no record of a Philippe baptised in Jersey at that time.

The Selous family first appear in Jersey records in the 1630s, suggesting that they might have been Huguenot refugees, although this date is midway between the two waves of refugees who reached Jersey from France. Earlier baptisms may have been too early to be found in the surviving Jersey registers, however.

Selous' background was solidly middle-class. Descended from French Huguenots with ancestral ties in Jersey, Selous was the son of the miniature painter Gideon Slous, and Sophie Ann Lokes, a native of St Helier. The extended family had lived in London since the mid-18th century, and following a series of moves, Gideon established his household in a comfortable home at 2 Panton Street, Deptford. It was here that the family enjoyed the status of the 'cultured and well-to-do classes'. Henry was educated at home and benefited from a liberal education in music, literature and painting.

Armed with this success, he changed his name in the mid to late '30s from 'Slous' to its original form of 'Selous'. This was to prevent confusion with his father, whose father had in turn anglicised 'Selous' (the family's original name), to make it fit in. But Selous's mode of art could barely have formed a greater contrast with his father's intricate cameos. Gideon worked on the microscopic scale of Hilliard, but his son's pictures were huge.

He started work at the London Stock Exchange, where his elder brother Frederick Lokes Selous would become chairman, but soon abandoned finance for literature. His first book, Tales by a Rambler, was published in 1836. This was followed in 1850 by his first play, The Templar, produced at the Princess by Charles Kean, who took the leading part.

Hamilton of Bothwell Haugh was produced by Phelps at Sadler's Wells in 1855, Phelps playing Hamilton. When it was revived later, this part was taken by Henry Irving.

When touring theatrical companies visited Jersey in the 1860s and ‘70s Hamilton of Bothwell Haugh was always their star piece.

The greatest success was True to the Core, a Story of the Armada at the Surrey in 1866. This won a prize for the best nautical drama, and roused intense patriotic enthusiasm when taken on tour to most of the provincial theatres.

Frederick Selous, Angiolo’s nephew, was born in 1851. He was a renowned big game hunter and explorer in Africa. He fought in the first world war, despite his age, and was killed in action in 1917 serving in the East Africa Company.

One of the most important game reserves in Africa, the Selous Reserve in Tanganyika, is named after him.

Henry Selous, Angiolo’s brother, was an artist and author of children’s books. Balleine records his place of birth as Deptford, in 1802.

Angiolo and Henry’s elder brother Frederick does not merit a separate entry in A Biographical Dictionary of Jersey, but he was arguably the most successful of the three, with a long career in the London Stock Exchange, rising to be chairman of its committee.

”The Selous family were originally French Huguenots, who settled in Jersey after the revocation of the Edict of Nantes. Annoyance at being turned out of France caused Gideon Slous to omit the ‘e’ from the surname, but later this was re-adopted by his son Frederick Lokes Selous, father of Frederick Courtenay.

"My father was a man of high and varied talents and very high character, of French, or at any rate, Jersey descent. He started with nothing in life, and with only such education (beyond what he owed to his mother, an uncommon woman, who probably did better for him) as an ordinary private school had afforded, equipped himself with French and Italian in perfection, entered the Stock Exchange at an early age, had a successful career there, and rose to be chairman of its committee. He was a fine whist and chess player (more especially, or more notedly, the latter) and was reputed, I believe, at one time, to be the best amateur player of the clarinet. Music was his constant and greatest delight, but his pen was also an instrument which (though he sought no public beyond his friends) he often used very entertainingly. He was a brilliant—often a witty—talker, with a distinction of manner, more French- than English-seeming in its light debonairness, and his individualities, traits, foibles, etc., were so many and vivid, that to write either of him or of Dr Johnson with scanted pen, would be much the same thing. My two uncles, the artist and dramatist, who lived next door, on each side of us, would also require portraiture for anything beyond this bare statement. Both were out-of-the-canvas-stepping personalities, carrying with them atmosphere and aroma.”

The book includes the following quotation from Frederick Lokes Selous, who wrote that he remembered seeing the funeral procession for Nelson in 1805:

"I also witnessed another performance which shocked me more than anything I ever beheld, for I was then very young. It was in 1815 or 16, I think, I happened to be rather early one day in my long walk to Great St Helen's, which took me past St Sepulchre's and the broad opening to the narrow streets of the Old Bailey. The sun was shining brightly across Newgate, and on chancing to look towards Ludgate Hill I saw dangling to a beam at the west side of Newgate five human beings suspended by the neck. One of them was a woman, who with a feeling for symmetry had been hung in the centre. All five had white night-caps drawn over their faces to conceal the horrible convulsions of the features. I don't know what their crimes had been, people were hanged in those savage days for stealing a shilling, or even cutting a stick from a plantation. The time appointed for cutting down the bodies had nearly arrived, and the crowd had diminished to an apathetic group principally engaged in cracking nuts and jokes, and eating brandy balls all hot; but horror gave speed to my steps and I soon left hideous Newgate behind me.”