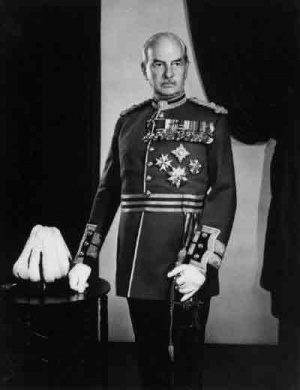 Lieut-General Sir Arthur Edward Grasett (1888–1971) was a Canadian-born and educated soldier who served with the British Army in Canada, England, India and China, before becoming Jersey's first Lieut-Governor after World War 2.

He was born 1888, the eldest son of A W Grasett of Toronto, Ontario. He was educated at Upper Canada College in Toronto, Ontario. He enrolled at the Royal Military College of Canada in Kingston, Ontario in 1906, remaining there until 1909. He was College Battalion Sergeant Major from 1908 to 1909.

He was commissioned into the Royal Engineers in 1909 and served with distinction during World War I and attended Staff College, Camberley in 1920, followed by Imperial Defence College in 1921. He served on operations on the North West Frontier of India from 1921 and then as a General Staff Officer at the Staff College from 1935.

As a Brigadier, he served on the General Staff in the headquarters of Northern Command from 1937 and was appointed Commander of British Troops in China in 1938. He served in World War II as General Officer Commanding 48th (South Midland) Division from 1941 and was made General Officer Commanding-in-Chief of VIII Corps on the South Coast of England from November 1941. In 1944 he was posted to the War Office and he was with SHAEF from 1944 to 1945.

He was appointed Lieut-Governor of Jersey and Colonel Commandant Royal Engineers in 1945 and retired in 1947.

In 1935, he married Joan Mary Foster, the daughter of J K Foster of Egton Manor, Yorkshire.