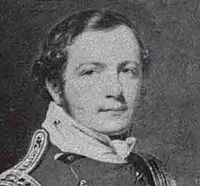 Had John Le Cornu been born a few decades earlier he might well have risen to high rank in the Army, but he was only 21 when peace with America and France in the wake of the Battle of Waterloo saw him back in Jersey as a Captain on half pay. He had already had the opportunity to make his mark as a Lieutenant on active service in New Brunswick and on the border with the United States.

The eldest son of John Le Couteur and Marie Dumaresq, he was born at Belle Vue, St Aubin, on 21 October 1794. He entered the Royal Military College at the age of 14 and three years later he left home to discover the world through the war. Though he had hoped to serve under Wellington in Spain, the young lieutenant respected his father's wishes and signed up with the 104th Foot stationed in Canada.

A tough and tenacious soldier, he wrote a detailed diary, which he was to maintain for the rest of his life. It betrays his humanity and how deeply affected he was by the atrocities he witnessed. He cried at the death of a fellow soldier and fainted when the blood of a man receiving the lash splashed onto his face. His men were glad to be in his service because he did not follow the traditional floggings and court martials imposed by other officers.

In February 1813, the 104th New Brunswick Regiment was ordered to march overland from Fredericton to Kingston. His diary records his impressions of that fantastic trek as well as the horrors and hardships of war. He saw plenty of action while present at the Battle of Sacket's Harbour, and at many other battles during the Niagara campaign of 1814. While stationed at Kingston at March 1815, he was chosen to take the official announcement of the Treaty of Ghent to Montreal.

In the two and a half years that he was in Canada, he grew up considerably and changed his opinions of Americans. When he first arrived, he thought of them as "rascals" who "are worse than Frenchmen". But when he was asked to take in the truce flag to the enemy-occupied Fort George, he met an American and they got along famously. He noticed many similarities to the Canadians and wrote that the conflict is "uncomfortably like a civil war".

He did not get on quite so well with the Indians. He wrote of the Sioux in his diary:

"The Indians were very savage. One tomahawked an American close to me during the parley. Indians are ticklish friends to deal with. I refused to give a half-drunken Indian a hide he coveted over and above the meat which had been issued to his tribe. He snatched his tomahwawk and made a motion as if to cut me down. Self-preservation made me place my drawn sword to his throat."

After the war Le Couteur stayed for a time in Montreal, and then in the Caribbean. In May of 1817, the 104th Foot was dissolved and he returned to Jersey. 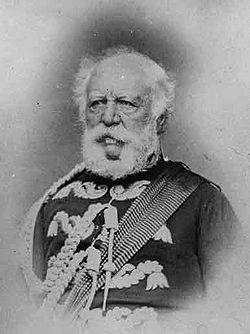 At 14 Le Couteur had an attack of pleurisy and shared a room at the Royal Military College with George Fitzclarence, illegitimate son of the future William IV. Two years later he was put in charge of another royal son, Henry Fitzclarence, and did so well that the future king promised him:"If ever I can be of service to you, you need only remind me of this". That was to lead to him being appointed the King's aide-de-camp in Jersey in 1830, a role he continued under Queen Victoria. It was his responsibility to escort her when she visited Jersey in 1846.

Back in Jersey Le Couteur married his first cousin, Harriet Janvrin, in 1818 and settled in Le Bocage, close to his old home. In 1821 he was appointed ADC to the Lieut-Governor, Sir Colin Halkett, with the rank of Lieut-Colonel. He was also Colonel of the West Regiment of the Militia.

He involved himself in parish politics and was responsible for the introduction of the tarmacadam process on the parish roads, probably before it had been used anywhere else. He was Constable for nine years from 1826 and was then elected Jurat, in a highly charged election, which he won by a majority of two votes to one. He was responsible for the purchase of the island's first lifeboat and was put in charge of the construction of the new road from St Helier to St Aubin. He was also responsible for the removal of Militia cannons from the churches, the construction of arsenals and the abolition of Sunday elections.

He was appointed Viscount in 1842 and took command of the Town Regiment of the Militia in 1850. His main hobby was gardening and he was a founder of the Jersey Agriculture and Horticulture Society and became its secretary.

He was knighted in 1872 and died three years later, having had two sons, John, who died young, and John Halkett, Lieut-Colonel of the Coldstream Guards, who also died before him, and three daughters, Harriet, Mary and Sophia.

The following is an extract from Sir John Le Couteur's will, held by Jersey archive: