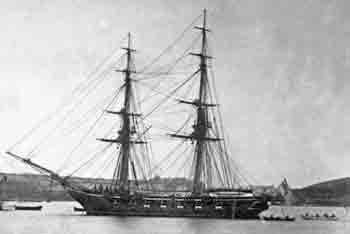 Descended from the Jersey family, George Le Geyt entered the Navy in March 1791, on board the Colossus, 74, Capt Henry Harvey, lying at Spithead. Being discharged in the following August, he next, in March, 1792, joined the Hussar, 28, Capt Rupert George, and sailed for the Halifax Station, where he assisted at the capture of two privateers, Republicaine and Jou-jou.

On the former of those vessels being brought into the Service, and named the Prince Edward, and the command given to Lieut John Saville, Mr Le Geyt was appointed master's mate, and in that capacity witnessed, on 7 July 1795, the capture, by a force under the orders of Capt the Hon Alexander Cochrane, of two French ships, La Prevoyante, of 21, and La Liaison, of 18 guns. After their surrender, he went on board 'La Prevoyante and aided in fitting her with jury masts.

That frigate being subsequently added to the British Navy, Mr Le Geyt continued in her, under the command of Capt John P Beresford, until the spring of 1796; and was twice sent into port in charge of detained vessels. He then removed to the Resolution, 74, bearing the flag of Vice-Admiral George Murray, under whom he was further present, on 2S August 1796, at the capture of the French frigate Elisabeth.

On the 13th of the following November, Mr Le Geyt was nominated Acting-Lieutenant of the Rover, 16, Capt George Irvine, in which vessel (being confirmed to her on 27 January 1797) he remained (assisting intermediately at the taking of Le Jean Bart, a noted privateer) until wrecked in a fog in the Gulf of St Lawrence in August 1798.

On his return, immediately afterwards, to England, in the Resolution, Capt William Lechmere, our officer, who had then been for upwards of six years on the Halifax Station, was at once, at the request of Capt John Holloway, of the St George, 98, appointed to that ship.

Removing, as Second-Lieutenant, in March 1799, to the Tamar, of 40 guns, and 281 men, Capt Thomas Western, he proceeded soon with the flag of Lord Hugh Seymour to the West Indies, where, besides contributing to the reduction of Surinam, he served at the capture, among numerous other vessels, of La Republicaine, French national corvette, of 32 guns, and 175 men (after a close action of about ten minutes, a loss to the enemy of nine killed and twelve wounded, and to the British of only two wounded); also of that of Le General Massena, ship privateer of 16 guns (pierced for 18), and 150 men ; and of a schooner privateer of 10 guns and 50 men.

Towards the close of 1801 (having been, the last year and a half, First-Lieutenant of the Tamar, Mr Le Geyt joined the Leviathan, 74, bearing the flag, at Jamaica, of Sir John Thomas Duckworth, who promoted him, on 28 May 1803, to the command of the Stork, 18 — an act which the Admiralty approved. While in that sloop, in which he continued upwards of nine years, Capt Le Geyt received a public letter of thanks from the Governor of New Providence, for conduct during an expected attack on the Island, and subsequently a vote of thanks from the Chamber of Commerce: he effected also the capture, on 24 February 1804, of the French national schooner Coquette, of 2 guns and 95 men, after a chase of 265 miles and, on the 30th of the ensuing month, of 'Hirondelle, privateer, of 3 guns and 44 men.

On 23 March 1805, he cut out, from Cape Roxo Cula, the Dutch privateer Antelope, of 5 guns and 54 men. In August 1806 he was sent with a small squadron, consisting, besides his own vessel, of the Superieure, sloop, and the Flying Fish and Pike, schooners, to attack a number of small vessels located at Batahano, in the Island of Cuba. Although the Stork, from her draught of water, was unable to approach within 30 leagues of the place, the objects of the expedition were nevertheless fully accomplished by the other vessels, aided by her boats, under the command of Capt Edward Rushworth.

In 1807 Capt Le Geyt was ordered with convoy to England, whence, in 1808, after he had been for some months employed on the Guernsey station, he took out the Pope's Nuncio to the Brazils. Returning next to the West Indies, he united in the blockade of Martinique, and was so employed until its surrender. While off that Island, on 12 December 1808, he co-operated with the 'Circe', 32, Capt Francis Augustus Collier, and the Morne Fortunee, gun-brig, and displayed much coolness and intrepidity in silencing the fire of two batteries, and of a body of troops which protected an enemy's schooner, aground between the Pearl Rock and Town of St Pierre ; and he then, in company with the Circe and Express’', schooner, commenced an action with four adjoining batteries, under which lay two other vessels, one of which, Le Cygne, corvette, 16 guns, was in the end destroyed.

In April 1809 being on a cruise with the Circe, then commanded by Capt Edward Woollcombe, the Stork fell in with a French squadron of three line-of-battle ships and two frigates, steering for the Saintes. With the intelligence of this, she was immediately despatched to the Commander-in-Chief, and the result was the capture of the 74 gun ship, D'Haupoult.